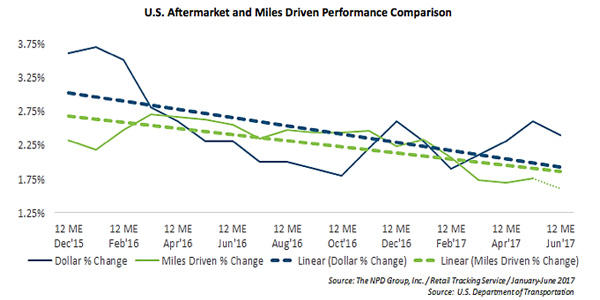 The storyline for the U.S. automotive aftermarket midway through last year was that average retail prices were down, yet dollar sales continued to grow. That story has changed in 2017.

With a nearly 3 percent increase in average selling price, dollar sales grew 1 percent in the first six months of the year, while unit/quart volume declined by 2 percent, according to the NPD Group.

“Retail price increases, driven by a mix of inflation and product mix changes, are influencing the aftermarket trend so far this year,” said Nathan Shipley, NPD Group director and automotive industry analyst. “We are also seeing a link between the industry’s performance and miles driven, the latter of which is growing at the lowest rate in over two years. Higher gasoline prices in the first 29 weeks of 2017 factor into this slowdown. To put it in perspective, a price increase of just 1 cent per gallon leads to a spending increase of $4 million per day in the U.S. What seems like a little goes a long way, and impacts consumers’ inclination to spend within the aftermarket and at retail in general.”

In the first half, the top-performing categories were tire/wheel accessories (up 7 percent), wipers (up 5 percent), lighting (up 4 percent), batteries (up 4 percent) and tape (up 3 percent). With the exception of batteries, all of these top growth categories experienced retail price increases of 3 percent or more.

“In addition to the miles driven story, there are a number of other factors influencing the aftermarket today with long term results,” said Shipley. “Aftermarket consumers are slowly migrating toward making non-distressed automotive product purchases online, extended oil-change intervals are impacting the number of times a DIY consumer walks into an auto parts store, and millennials are becoming the new core consumer target. These are the ones that should be top of mind.”