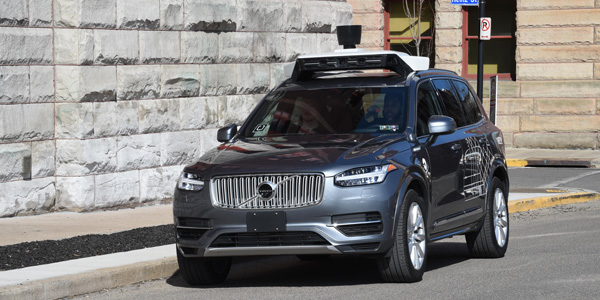 Uber Technologies has halted its testing of self-driving vehicles after a March 18 incident in which one of its cars struck and killed a pedestrian in Tempe, Ariz.

Uber Technologies has halted its testing of self-driving vehicles after a March 18 incident in which one of its cars struck and killed a pedestrian in Tempe, Ariz.

The Uber vehicle, a 2017 Volvo XC90, was in autonomous mode with a driver behind the wheel when it struck 49-year-old Elaine Herzberg, according to Sgt. Ronald Elcock of the Tempe Police Department. Herzberg was walking a bicycle from one side of the road to the other when the accident occurred, and Elcock noted that she was “outside of the crosswalk.”

“As soon as she walked into the lane of traffic, she was struck by the vehicle traveling northbound,” Elcock said.

The police department’s preliminary investigation showed that the Uber vehicle, operated by 44-year-old Rafael Vasquez, was traveling at approximately 40 mph at the time of the accident and did not attempt to slow down, according to Elcock.

In a tweet, Uber CEO Dara Khosrowshahi said the company is “thinking of the victim’s family as we work with local law enforcement to understand what happened.”

Tempe Mayor Mark Mitchell said Uber’s decision to temporarily suspend testing of self-driving vehicles “is a responsible step to take at this time.”

“The city of Tempe has been supportive of autonomous vehicle testing because of the innovation and promise the technology may offer in many areas, including transportation options for disabled residents and seniors,” Mitchell said in a statement. “Testing must occur safely. All indications we have had in the past show that traffic laws are being obeyed by the companies testing here. Our city leadership and Tempe Police will pursue any and all answers to what happened in order to ensure safety moving forward.”

Investigators from the National Transportation Safety Board are in Tempe this week to collect information on the collision. “The investigation will address the operating condition of the vehicle, driver interaction with the vehicle and opportunities for the vehicle or driver to detect of the pedestrian,” according to the agency.

Advertisement
In this article:technology, Uber