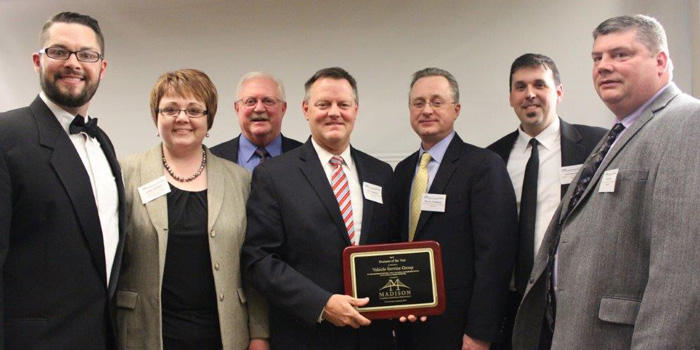 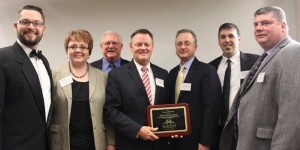 Vehicle Service Group (VSG), the parent company of Rotary Lift, Chief Automotive Technologies, Direct Lift, Forward Lift, Elektron and other brands, has been named Business of the Year by the Madison Area Chamber of Commerce. The award recognizes VSG’s leadership, vision, innovation and service in Madison, Ind., where it is headquartered. The chamber presented the award during its 91st annual dinner and awards ceremony.

VSG was formed in 2009, but its roots in Madison stretch back much further. Madison has been home to Rotary Lift’s flagship manufacturing plant for more than 50 years, and the facility has grown with the company. VSG’s North and South American operations, engineering, product development, R&D, customer service and support, training and sales/marketing teams are all based in Madison.

“This is the first time in our company’s history that we’ve received this award, and it is a testament to the outstanding things happening at VSG,” says Matt Webster, VSG vice president and general manager, the Americas. “Our employees’ hard work and increased involvement in the community over the last year did not go unnoticed.”

The Madison Area Chamber of Commerce Business of the Year Award is voted on by past award recipients. It is one of three awards – the other two honor a small business and an individual – that is presented annually by the more-than-350-member organization.

At the awards ceremony last week, chamber representatives recognized VSG’s community involvement and highlighted the creation of the VSG Employee Tribute and Wellness Park. The park, which opened over the summer next to VSG’s headquarters, features a walking track and basketball court for the use of employees and their families.

VSG’s ties to the community were featured last year with the launch of Raised in Madison, a Rotary Lift campaign that tells the stories of the people who build and support its car and truck lifts in Madison. Watch videos showcasing Rotary Lift products and the teams that make them by clicking HERE.

“Without all the hard, behind-the-scenes work of our Madison-based employees, recognition like this would not be possible,” says Webster. “We are fortunate to have such a great group of people, and I am looking forward to another successful year in 2015.”

Advertisement
In this article:chief, elektron, vsg