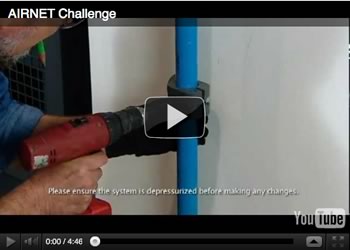 The video shows Patrick, an independent contractor, taking the AIRnet Challenge – a very basic compressed air piping installation done two ways: first with AIRnet piping and then with iron piping. Patrick’s vast experience is with iron piping, according to Atlas Copco, having only worked with AIRnet on a few occasions before the video shoot. The two processes are recorded and timed.

AIRnet comes with a wide range of polymer fittings that provide perfect alignment and make connections easy without the need for threading, welding, gluing or crimping, according to Atlas Copco. Combined with the smooth corrosion-free interior surface, the tight joints severely minimize air leakage, the company says, and the AIRnet piping system can be installed by one person.

The basic AIRnet system was completed in less than 35 minutes, while an identical system constructed of iron piping took Patrick one hour and 19 minutes to install.  The video also demonstrated how easily the AIRnet system can be tapped into at a later date for system modifications or additions, Atlas Copco noted.


Atlas Copco is offering a free hat, compressed air manual and more information on AIRnet to anyone who submits the form at www.atlascopco.us/airnetchallengeusa.