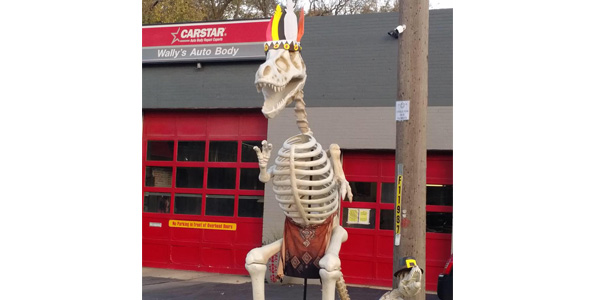 CARSTAR Wally’s Auto Body has adopted a prehistoric approach to growing its business.

CARSTAR Wally’s Auto Body has adopted a prehistoric approach to growing its business.

Of course, that doesn’t apply to the way the shop repairs vehicles – just the mascot that welcomes customers to the collision repair facility in Des Plaines, Ill.

Named “Wallysaurus Rex” by local schoolchildren, the large T-Rex and baby T-Rex have been a popular attraction at CARSTAR Wally’s, located on high-traffic Golf Road in Des Plaines.

CARSTAR Wally’s owner Sherri Slater first dressed them up in Chicago Cubs T-shirts and hats for the playoffs in October. Now they’re ready for Thanksgiving as an Indian chief and pilgrim.

Holiday plans are underway for December, and Des Plaines drivers should keep an eye out for a very large Santa and his helper.

“We originally bought the dinosaurs for Halloween, but the public loves it so much we decided to dress them for different holidays and hot topics,” said Slater. “It’s a unique, fun way for us to connect with customers and stand out in our market.”

Advertisement
In this article:CARSTAR Wally's, Illinois