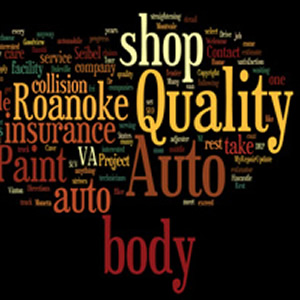 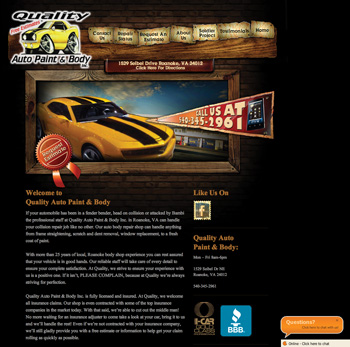 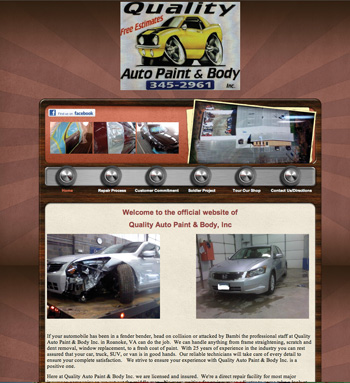 In the February 2012 issue of BodyShop Business, we introduced you to Quality Auto Paint & Body, a family-owned shop in Roanoke, Va. The owner, Richard Henegar, Sr., has been in business for over 25 years. Sales are about $1.2 million. Their website, www.qualityautopaintandbody.com, was underperforming and needed help.

Quality’s site had a nice retro look and feel, but it was missing their contact information. People could see the phone number incorporated into the Camaro logo, but there was no address.  There was also no “call to action,” for example, a “Request an Estimate” feature.

Richard Henegar, Jr., 26, fulfills the roles of office manager and estimator. When shown the poor search engine rankings his site was getting, he made the decision to let a developer give it an extreme makeover.

“Everything the developer discussed with me sounded great,” says Henegar, Jr. “They knew what they were talking about. I really wanted to move forward, but I had to get approval from my folks. I had to figure out how to convince them that the cost for this was an investment rather than an expense, and that our return on investment would be greatly worth it. Due to the current state of the economy, and a bittersweet slew of large hits, our cash flow was tight. But the developer was willing to work with us on a payment plan, so I gave them the green light.”

The developer went to work and came up with a design that melded the old retro look with a new, hip website. The focal point of the homepage is now a new, late model Camaro in the center, with a ’69 Camaro incorporating the logo in the upper left. The background now has a brick-and-wood grain look. The address is now right smack in the upper middle, and the phone number is now highlighted in a banner that points to the new Camaro. Just below the Camaro is a ribbon linking to a “Request an Estimate” form.

All these new items are above the “scroll line” on the site, making it easy for visitors to quickly find an address and phone number or get to an online estimate request form. There is also now a customized Facebook button on the site too.

Ideas Clash
“When I first saw the new design, I loved it. I thought it was awesome and was going to be a big hit,” says Henegar, Jr. “But I didn’t like some of the content and wanted to add some of our insurance partners, by name, into the homepage.”

Spring McCann, the project manager for the website redesign, was opposed to Henegar’s idea, however, as he believed it would negatively impact the site’s search engine optimization.

“The way you write for the Internet is quite different than how you write for things like brochures and flyers,” said McCann. “You never say things like ‘we;’ instead, you say ‘our auto body shop.’ You don’t refer to your technicians as ‘technicians,’ you call them ‘collision repair technicians’ or ‘auto body technicians.’ It’s redundant but essential in telling search engine robots who you are, what you do and where you do it.
“We also urge our clients not to put the names or logos of insurers on their sites. Most insurers frown upon that and are quick to find these inclusions on sites and fire off cease-and-desist letters.”

New Word Cloud
Compare the old site’s “word cloud” with the new one. These word clouds show, in bigger lettering, what words show up more than any others on the site, visually showing you what search engines see.

The original site was missing Quality’s hometown and surrounding towns. It did feature the top keywords “auto” and “body.” Contrast this with their new word cloud. Notice how “auto” and “body” are even more pronounced, and you can also clearly see their hometown of “Roanoke” as well.

The new site has Google Analytics installed so the Henegars can see how much traffic they’re getting and where that traffic is coming from, the average number of pages viewed and the average time people are on their site. It usually takes 60 to 90 days before search engines fully recognize a new site or an optimized old site. The results, so far, have been great. They’re on page one or two for the most often used keywords in their hometown, and now their site shows up in neighboring towns as well, when they weren’t in the top 250 results in the past. Dramatic results brought about by true search engine optimization that will bring cars to the door to fix – and that’s what it’s all about.

“We love the new site,” says Henegar, Jr. “The testimonials and ‘Live Chat’ features are really cool. And they’ve built this new site in Word Press, so we can go in and make changes ourselves without needing to know anything about HTML coding.”

BSB Contributing Editor Mark Claypool has nearly 30 years of experience in the fields of workforce training, business/education partnerships, apprenticeships, training and web presence management. He is the CEO of Optima Automotive, which provides website design, development, search engine optimization (SEO) services and Social Media Management services. He also serves as the Regional Sales Manager for Metro Paint Supplies in Chicago. Claypool’s work history includes VP of VeriFacts Automotive, founder of Mentors At Work (now a division of VeriFacts), executive director of the I-CAR Education Foundation and the National Auto Body Council (NABC), co-founder of the Collision Industry Foundation and national director of development for SkillsUSA. Claypool served, on a volunteer basis, as the Skills-USA World Team Leader for the WorldSkills Championships.