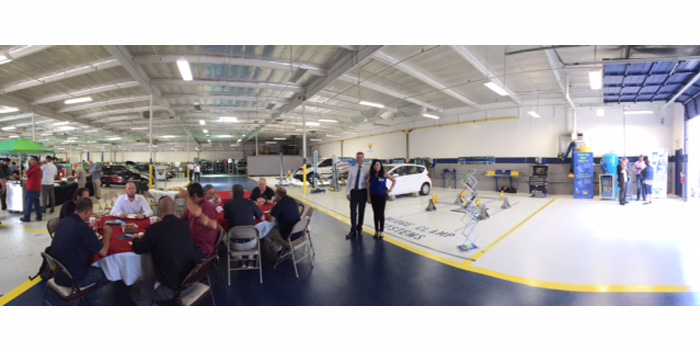 New company owner Bill Hatswell and his Craftsman Group of Companies has targeted the U.S. as Wedge Clamp’s ripest market.

A group of visitors including car dealers, body shop owners and insurance company representatives showed up to sample the canapés and view the full displays showcasing the new (to the U.S.) lightweight, portable anchoring, measuring and pulling tools that form the Wedge Clamp System.

“They all loved it,” said Peter Allan, Wedge Clamp’s chief operating officer for the U.S. “Some very important insurance people were here today, including reps from three of the major insurance companies: AAA, Allstate and Mercury.”

In its 30-year history, Wedge Clamp has concentrated on its home market of Canada and such farther-flung countries as Russia and Japan. But new company owner Bill Hatswell and his Craftsman Group of Companies has targeted the U.S. as Wedge Clamp’s ripest market – made even more attractive by the low Canadian dollar and resurgent U.S. economy.

“We have systems in maybe 20 or 30 shops in the whole country,” says Allan. “On the whole, very few people have seen or heard of it. Wedge Clamp is very new to the States.“

Compared to benchtop repair systems, which tend to be costly and space-consuming, the Wedge Clamp System is lightweight and affordable, and stores in much less space because many components hang on the wall.

“They get cars with what looks like minor damage, but once they pull the bumper or quarter panel, they often discover there’s been frame damage as well. They don’t have a rack system to fix it, and they don’t want to have to flatbed it to another shop. So now, instead of the high cost of buying a rack, they can use the Wedge Clamp EZE Tie Down system.”

In addition to its California address and Richmond, B.C. head office, Wedge Clamp has a facility in Suzhou, China. The company’s recent growth comes with an expanded product lineup including distribution of the Eclipse laser frame measuring system and the Stat-Gun anti-static paint preparation tool. The company has been up and running since February.

Advertisement
In this article:launch, wedge clamp