What Twitter Can Do for Your Business - BodyShop Business 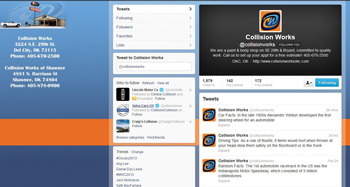 “It’ll be a cold day in hell before you’ll ever catch me tweeting,” a shop owner recently told me.

The mere thought of having a Twitter account for his business made him disgusted, and you could clearly see that on his face. It’s too bad. According to HubSpot, 42 percent of businesses have gotten sales through their participation on Twitter.

Ignorance Is Bliss
Ignorance is bliss for a lot of people in this world. There’s only so much collision work out there, and the competition for each and every vehicle is higher than it has ever been.  Social media is all about branding your business. In fact, it was the new frontier of marketing. But describing it as “new” anymore is so 2012. Generation Y (people under 30 years of age) is the largest generation on the planet. An astonishing 97 percent of them are on social media. It should come as no surprise that most of them are participating in social media via their mobile phones. Twitter is huge with Generation Y.

Do you ever see anyone under 30 in your shop? Of course you do. So even if you don’t “get it” with regard to Twitter, you should not turn a blind eye to it. Designate someone in your organization who is already on Twitter to set up and manage a Twitter account for your business, or get someone to research and learn about it. Another option is to outsource the management of Twitter to a company that will do the tweeting and monitoring for you. This can be done for as little as $95 per month.

Setting It Up
Twitter allows you to create a customized background that showcases your company’s brand. The size should be 2,048 pixels wide by 1,900 pixels high. These backgrounds don’t scroll down as the visitor scrolls; they remain static. You should include your contact information on this background as well.

For the sake of consistent representation of your brand, the icon, or profile picture, that you choose to represent your business on Twitter needs to be the same as what you use on Facebook and Google+. If you have a horizontally oriented logo, it should be altered into a square or it will be cut off on the right and left edges. Twitter limits the size of the image you submit to 700KB, and then they will resize the image you upload. Twitter accepts images in JPG, GIF or PNG formats.

The “cover” photo will really allow you to showcase your business. Make it graphically pleasing to the eye, interesting, fun and engaging. Unlike Facebook, you can include a call-to-action that directs your followers to an action you want them to take. To add a cover to your Twitter account, you simply need to click on the gear located at the top right side of the Twitter page, then click on “Settings” from the drop-down menu. Next, go to the profile tab on the left and upload your photo under the header option.

Search Ranking
Effective social media participation is now having a positive effect on your search ranking potential, so be sure to include keywords in your 160-character bio on Twitter. Remember that those keywords are “auto body,” “body shop,” etc. (visit www.bodyshopbusiness.com and type in “using SEO” in the search box).

Build a following and promote your Twitter participation everywhere you can. Use QR codes on your printed materials. Find and follow people in your community through https://twitter.com/search-advanced. You can search by places or by terms like “car crash,” “body shop,” etc., to see who in your area was in an accident and tweeted about it. And keep in mind that anyone who follows you should automatically be followed back. It’s considered bad form to only take on followers and not follow others.

Character Limit
When you post something on Twitter, called a “tweet,” it’s limited to 140 characters, including spaces. But tweets of 120 characters or so are getting more clicks, so less is more. You can schedule your tweets to go out at a certain date and time so you don’t have to be hovering over your computer all day long to send them out. You should send out at least two tweets per day, and as much as 15 to 25 if you’ve got the time and content.

You can pay a few bucks to feature a tweet at the top of your Twitter feed. This provides you with an opportunity to run specials and promotions and provides you with increased visibility for a longer period of time than the typical tweet. These should feature a photo or video which will be more engaging and ideally provide you with more leads for your business.

Next Up: Twitter Vine
Next month, we’ll explore more on Twitter, including information on the new Twitter Vine, a new mobile video app that allows you to capture and share short videos six seconds long or less to highlight various aspects of your business. This opens up an entirely new option for brand recognition. Cutting edge is what you’ll be if you’re a body shop participating on Twitter.

BSB Contributing Editor Mark Claypool has more than 30 year3s of experience in the fields of workforce development, business/ education partnerships, apprenticeships and Web presence management. He is the CEO of Optima Automotive (www.optimaautomotive.com), which provides website design, development, SEO services and social media management services. Claypool’s work history includes stints at Metro Paint Supplies, VeriFacts Automotive, the National Auto Body Council (NABC), the I-CAR Education Foundation and SkillsUSA. He is the founder of Mentors At Work and co-founder of the Collision Industry Foundation. He served, on a volunteer basis, as the SkillsUSA World Team Leader for the WorldSkills Championships from 2003 to 2011.