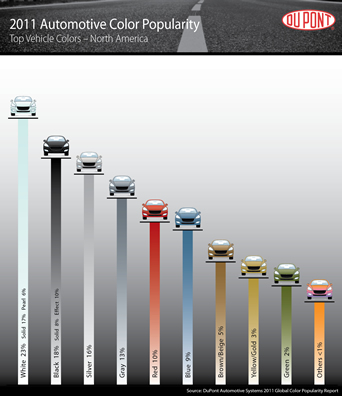 White/white pearl has emerged as the fastest-growing color to tie with silver as the world’s leading automotive color choices, according to the recently released 2011 DuPont Automotive Color Popularity Report. A substantial increase in the popularity of white/white pearl globally in 2011 has enabled it to surpass longstanding rivals black and gray to join silver at the top of the world color ranks in this year’s report.

DuPont says its report, in its 59th year, is the longest-running and largest of its kind in the industry, and includes automotive color popularity rankings and regional trends from 11 leading automotive regions of the world.

In 2010, white/white pearl was tied for third with gray in the world color ranks with just a 16 percent share, but its ongoing popularity in North America, combined with a surge in popularity in Europe, China, Korea, South America and South Africa, has helped to increase its position in 2011 to 22 percent globally, according to DuPont.

Black and gray dropped to third and fourth, respectively, in this year’s report, with red and blue strengthening and holding positions in fifth and sixth place.

The top global vehicle colors in DuPont’s report are as follows:

"While white/white pearl has historically been a popular color for vehicles, we’ve seen a bigger shift in its popularity this year than DuPont expected," said Nancy Lockhart, DuPont color marketing manager.

Silver and black have long been recognized in the top three for color popularity. However, in the past few years, white/white pearl has been steadily growing in popularity outside of North America, according to DuPont. In 2011, it jumped by more than 4 percentage points, according to Lockhart.

“There has been increased consumer acceptance for white, and our OEM customers are meeting consumer demand for the clean look it brings to vehicle design,” she said. “Silver and black were once the top colors of luxury, but white has increased in this area. The overall trend for casual luxury has spread to numerous vehicle types. The expectation to have a luxurious feel to the vehicle is globally sought. Classic white and pearlescent white effects are inspiring luxury design."

White/white pearl, with 23 percent market share, dominated North American vehicle color for the fifth consecutive year, led by the truck/SUV segment, with 29 percent. The intermediate/CUV segment found white to rise from 16 percent in 2010 to 18 percent in 2011.

Black/black effect captured 18 percent in the region and led popularity in the luxury vehicle segment, while black effect continues to increase over solid black on luxury segments. Silver decreased with 16 percent share overall in the region but continued to lead the compact segment in North America with 20 percent.

Gray had 13 percent of the market and was in fourth position across all segments, and red maintained its fifth-place rank with 10 percent of North American market share overall.

High-impact colors of bright blues and yellows with tempting hues of brown/beiges and greens continue to fill the region with colorful choices, DuPont says.

In addition to its 59th Global Automotive Color Popularity Report, DuPont develops an annual color trend show to share with the world’s leading automotive manufacturers as they seek to develop color palettes for future vehicles. This year’s trend show, Sense of Color, showcases the emotions and dynamics of color.

The senses play an important role in understanding if a color is loud or quiet, powerful or somber, exotic or sophisticated, DuPont says. DuPont Performance Coatings says it demonstrates the influences of colors by how tasteful, touching, reminiscent or calming a color will react with consumer preferences and moods.

The 2011 DuPont trend show is segmented into four groups, as follows:

"DéjÀ vu" – The colors in this group are intense and meaningful as DuPont remembers similar versions of these colors from the past. Rich greens and reds, like "Green Velvet" and "Flashback," are historic colors that symbolize thoughtfulness, heritage, comfort and stability. New sparkling effects and intense colors bring a modern fit to white and dark red. Modern shades of gray and beige bring relevance and quality to the hues, favorites for a mature market and exclusive vehicles.

"Sound of Silence" – Although the colors in this group are slightly muted and quiet, the calming colors featured in this group are determined to make their mark. The eco-friendly hybrids and energy-efficient technologies are thought provoking inspirations for the future. In this group, color is influenced by nature’s palette and the fast-growing world of technology. Sophisticated metallic, soft hues "Crescendo" and "Silent Auction," and earthy tones "Minor Gamut" and "Speechless" coexist in this group, and its dynamic make-up is a natural trend for global consideration.

"Touch of Blue" – This group focuses on the intense emotional attributes of color, inspired by the environment. Home accessories and interior design inspire some of the bright and rich blues in this group. Fashion inspires this group as well, particularly in the pale blue and grayish undertones. The sense of familiarity and dramatic impulses of the light metallic and chromatic hues make this group popular among all vehicle segments, which includes contrasting sober shades like "Tactile Teal" and "Tickled Blue." DuPont has tracked blue trends in all markets, including automotive to best new style spaces for the automotive segment. This demand is expected to grow as the global focus on blue increases.

"Matter of Taste" – The exaggerated and unusual colors featured in this group offer a creative menu of colors that spotlight international flavors. Powerful shades of yellow, green, pink and purple bring excitement to a fearless group of colors. Caramel, tangerine and other savory colors are eye-catching and perfect for new vehicle launches, brand colors, concept vehicles, limited editions and the aftermarket. They put the individual taste of the driver at the forefront and include colors "Sweet Caramel" and "Berry Fusion."