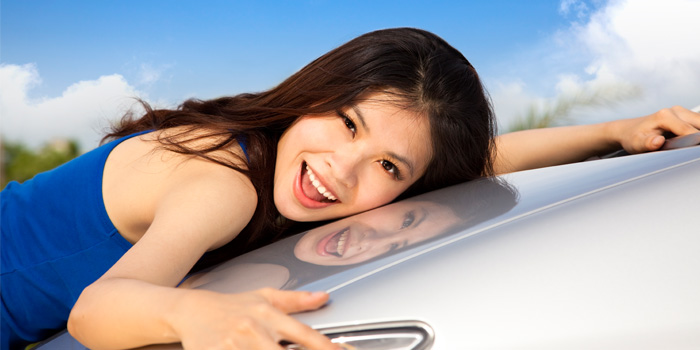 The color and style top the list for nearly 50 percent of respondents (48.15 percent), with power and performance following closely behind at 40 percent (40.74 percent).

A recent study by CARSTAR Auto Body Repair Experts found American drivers fall in love with their vehicles for a variety of reasons, dote on them with care and customization, then mourn their loss when they’re sold or totaled.

CARSTAR asked American drivers just what it is they love about that hunk of metal that sits in their driveway.

“Drivers have a unique relationship with their cars,” said Dan Young, U.S. president, CARSTAR Auto Body Repair Experts. “They name them, they talk to them, they protect them from the elements and damage. It’s no wonder it’s such an emotional time when something happens to their car. It can be heartbreaking to see your crumpled vehicle on the hook of a tow truck. That’s why we’re here. We try to take the stress and emotional duress out of the repair process, handle all the details for you and get your car back to you in pre-accident condition as quickly as possible.”

So what do Americans love about their cars? The color and style top the list for nearly 50 percent of respondents (48.15 percent), with power and performance following closely behind at 40 percent (40.74 percent). For others, it’s a matter of independence and pride, as 30 percent (29.63 percent) cited the independence their vehicle gives them as their key crush, while nearly 15 percent (14.81 percent) said their pride in paying it off helped inspire their love. 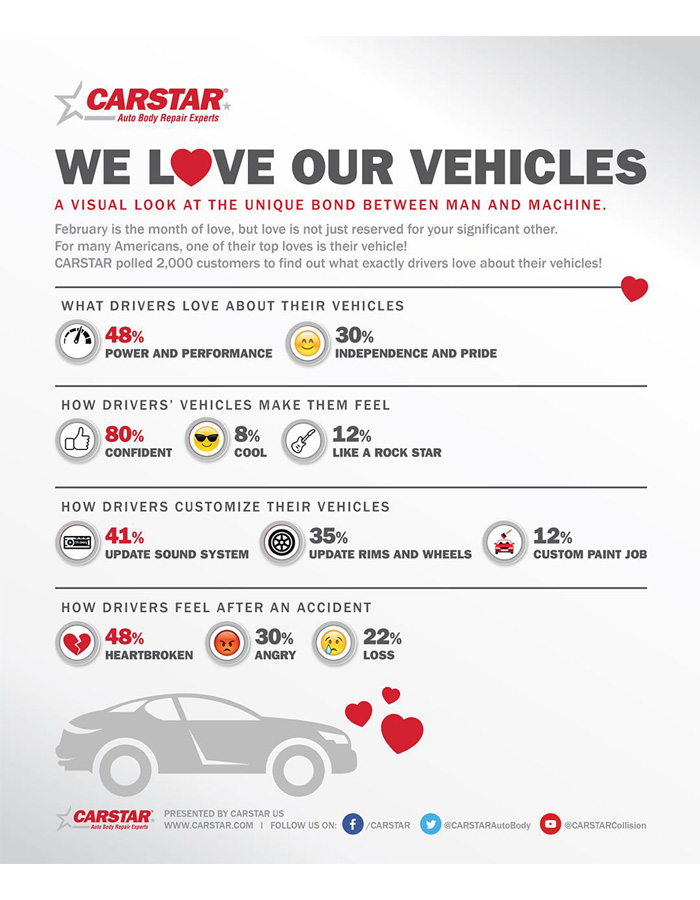 How do drivers’ cars make them feel? Just like a great outfit, a car can project confidence. Some 80 percent (80.77 percent) said their cars make them feel confident, an outward reflection of their achievements. Nearly 12 (11.54 percent) percent said their cars inspire their internal Van Halen, making them feel like a rock star. Cars also make drivers feel cool, for eight percent (7.69 percent), and like a racecar driver, also at eight percent (7.69 percent).

Americans’ cars are a reflection of their personal style. Drivers love to customize the cars they love, from simple decorative touches to unique modifications. The majority – 41 percent – want their music on the road to match their personality, so they upgrade their vehicle technology with a state-of-the-art sound and on-board technology system. Many rank unique tires and rims as their top customization, with 35 percent (35.29 percent) opting for tricked-out tread. Tied are colored headlights and undercar light kits and a customized interior at 18 percent (17.65 percent). Drivers also want their cars’ paint jobs to show their style, with 12 percent (11.76 percent) opting for special paint and trim jobs, wraps and graphics.

CARSTAR Study Finds Out Why You Love Your Car