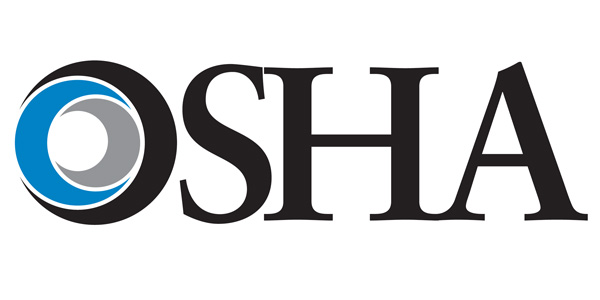 For many employers, nothing is more terrifying than a visit from OSHA.

In fiscal year 2016, the agency conducted 31,948 inspections nationwide, citing employers for 58,702 safety and health violations, according to the OSHA website. Currently, fines can range from a maximum of $12,934 for a “serious” violation to $129,336 for a “willful” or “repeated” violation.

More than half of those 31,948 inspections were “unprogrammed.” John Olaechea, a compliance assistance specialist in OSHA’s Region VIII office in Denver, noted that unprogrammed inspections “are our top priority.”

“This is where we’re getting a report of an unsafe or unhealthy condition” from inside or outside the business, Olaechea explained during an April 12 presentation at the Collision Industry Conference (CIC) in Westminster, Colo. “It can be in the form of a complaint from an employee, or a representative of an employee – it could be their attorney, their union steward or their mom – where they call us and say, ‘Hey, there’s a problem out here. You guys need to do something about it.’”

Two other situations can trigger unprogrammed inspections: referrals and reports of fatalities or accidents.

In a referral, an individual or organization outside the company notifies OSHA of unsafe workplace conditions.

“It’s basically like a complaint but not from an employee or their representative,” Olaechea explained. “It could be from another government agency, a customer or just somebody driving by who happens to know what the [safety] standard is, sees something dangerous and wants to call it in.”

An employer’s reporting of fatalities and accidents also can trigger an unprogrammed inspection. OSHA requires notification within eight hours of a work-related fatality and within 24 hours of a workplace accident that involves hospitalization, amputation or loss of an eye.

The other type of OSHA inspection is a “programmed” inspection.

Programmed inspections target facilities in industries with high injury and illness rates, or “industries where there’s a particular hazard that we don’t feel is necessarily being addressed nationwide,” Olaechea explained.

Regardless of whether OSHA is conducting a programmed or unprogrammed inspection at your facility, the agency won’t let you know that it’s coming.

“All OSHA inspections are by surprise,” Olaechea said. “We’re going to show up unannounced and start the inspection.”

When OSHA renewed the emphasis program in October 2017, the agency noted that workers in automotive services “face many hazards that can lead to serious injury, illness and death, including crushing hazards due to improper use and maintenance of automotive lifts and floor jacks, excessive noise, tire explosions, machine guarding, uncovered service pits and exposure to chemicals.”

Between Jan. 1, 2008, and Sept. 1, 2017, OSHA investigated 74 fatalities in the automotive-services NAICS codes, according to the agency’s public-establishment search database. 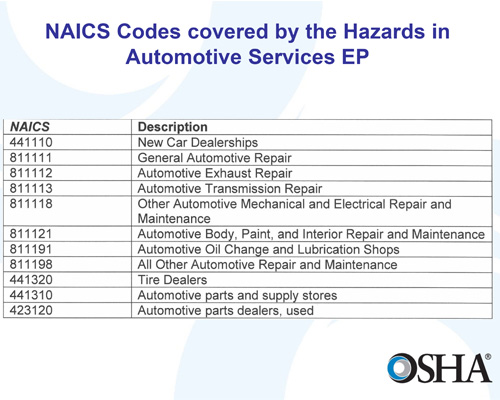 Olaechea noted that the main reason for launching the local emphasis program was to address the hazards associated with automotive lifts.

“A lot of [the 74 fatalities] came from these lifts not being maintained properly,” Olaechea said.

Interestingly, OSHA doesn’t have a standard for automotive lifts. When there’s no OSHA standard for a specific operation or hazard, the agency often will cite its General Duty Clause, which requires businesses to provide a workplace that is “free from recognized hazards that are causing or are likely to cause death or serious physical harm to his employees.” OSHA also uses consensus standards, which outline industry best practices.

In the case of automotive lifts, OSHA refers to ANSI/ALI ALOIM: 2008, “Standard for Automotive Lifts – Safety Requirements for Operation, Inspection and Maintenance.” The consensus standard, developed by the Automotive Lift Institute, requires at least one lift inspection per year and defines the attributes of a qualified inspector. The standard also details the qualifications and training requirements for lift operators.

“What we expect for most employers using these lifts is to follow the ANSI standard,” Olaechea added.

Since launching the local emphasis program on April 16, 2013, OSHA said it had conducted 425 inspections in Montana, North Dakota and the southern half of Colorado, and had cited automotive-services facilities for 313 violations, as of October 2017.

Olaechea was an OSHA compliance office for many years. In his current role, though, he provides general information about OSHA standards and the agency’s compliance-assistance programs.

He encouraged collision repairers to contact him if they have questions, and emphasized that calling him won’t put employers on OSHA’s radar.

“Sometimes people are worried that if they call up OSHA, we’re going to take down their name and end up at their facility,” Olaechea said. “We’re not doing that. Even if you call our enforcement officers, we’re not doing that. We have very specific ways in which we will end up at a facility, and calling us and asking questions is not one of them.”