Power sanders are much faster than hand sanding, and fast is the name of the game in collision repair. So stop hand sanding and learn to love the “bomb.”

own, it will wobble through the last few rotations just before it stops and lays flat again. The pad works the same way, lifting its edges at the outside, allowing the sanding residue to be cast out from under the pad.

Sandpaper grits that would be used in this shaping tool segment run from 80 to about 400. By the way, there’s a two-grit jump from hand sanding to machine sanding. For example, if the tech hand sands with 400 grit, he or she can get the same scratch by using 320 grit on a random orbit power sander. The power tool moves much faster. As another example, if the tech runs 180 grit on the D/A, he or she will need to move up two grits to 240 grit to get the same scratch by hand. In many shops, it’s common to see the painter run a random orbit sander with 320 grit and then hand sand the same area with 400. Hello, it’s the same scratch! So stop hand sanding, or at least move to 500 or 600 grit to see a finer result. 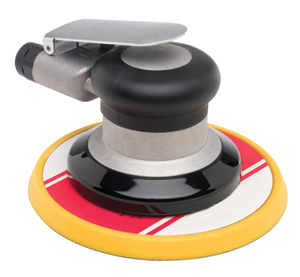 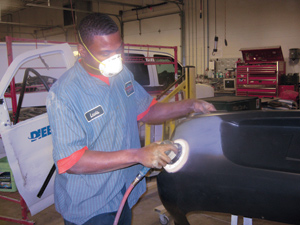 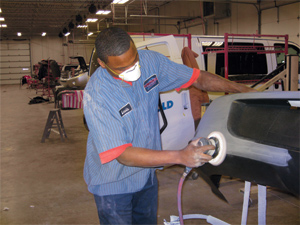 Race to the Finish

This is the point at which many techs pick up the rubber block or foam sanding pad, believing that the sanding must be done by hand to get quality results. In addition to a change in attitude, they need a very smooth-running sander! Final block sanding can be accomplished with super smooth versions of almost every tool we’ve described so far.

A straight line sander with a small stroke and velvety action is how craftsmen achieve the high-gloss finish on fine wooden furniture. Orbital or random orbital tools at this level will have a smaller offset, typically 3/32 inches, half or less than the sanders previously listed. These tools will remain in contact with the work surface (no pad wobble) and run in a nice, silky stroke. The three main offsets for random orbit sanders get smaller by half each time. The largest, most aggressive offset is 3/8 inches (6/16), with the next being half that or 3/16 inches (6/32). At the final finish level, the typical offset is a short and smooth 3/32 inches.

In my experience, small-stroke, smooth-running sanders are the type missing from many techs’ toolboxes. The reason, I believe, is techs’ fear that these sanders won’t run smoothly enough and be controllable enough to ensure the work will turn out perfect. Also, these tools are expensive, and power-sanding final detail work requires a change in procedure that many techs are uncomfortable with. In the end, far too many folks pick up a rubber block and scrub away at the surface at 67 cents per minute ($40/hour) labor time. If you buy the idea that more work could be done at the same or better quality, then you’re in the market for a super smooth power sander.

Two common choices of pads are 5- and 6-inch diameter models. There are still some painters who use 5-inch pads, arguing that they can get closer to the edges and moldings with smaller ones. If you’re one of those folks, please do this little test: Take a 5-inch sanding disc and a 6-inch disc, and lay the 5-inch disc as close to the corner of a piece of notebook paper as you can while still keeping the whole sanding disc on the paper. You can’t get any closer to any car molding than this. Draw along the edge of the disc. You’ll have a curved line about a half-inch back from the corner. “See how close I can get?” say the 5-inch disc advocates.

Now take the 6-inch disc and slide it as close to the edge of the notebook paper as possible and draw a line on its curved edge. Guess what? The line from the 6-inch disc is within 1/8 inches of the 5-inch line. My point is that the 6-inch disc will get just as close to edges and moldings as the 5-inch one, but it has 44 percent more surface area. The tech would sand 44 percent longer between disc changes and the cost is only about 35 percent more per disc – a bargain and a great production aid, too! The final finish power sanding I’m describing will require sandpaper grits from about 400 up to 2,000. Remember that two grit jump: 1,200 on a D/A is about the same scratch as 2,000 by hand.

Much of the work at this level is the sanding required on the clearcoat prior to a buff and polish. As much as 90 percent of this work is done with dry sandpaper, but I contend there is still a place for power wet sanding. Extra fine grits of dry sandpaper work so well because the abrasive manufacturers have done wonders with the lubricants they build into the latest versions of today’s papers.

The very first lubricant added to dry sandpaper was zinc stearate. These sandpapers were white instead of brown and were advertised as no-load or free cutting. The residue from sanding is correctly called “swarf.” It’s composed of both the sandpaper disintegrating and the dust from whatever you’re removing. Lubricants in sandpaper help to slide the swarf out of the way. Current dry-sand fine-finish papers use an even more sophisticated lubricant to prevent the paper from loading.

Wet sanding has always been useful for making sandpaper last longer as the water washes the swarf completely out of the way. The water also acts as a lubricant, cools the surface, extends paper life by three to five times and, when final sanding clears, allows for a bigger margin of error. The error we’re talking about is the clear resin that re-forms into a ball from the sander’s heat and gets caught under the pad.

I contend that painters who still hand-sand do so because they tried power sanding and dragged a ball of clear across the finish and left a 220 grit-sized scratch they couldn’t polish out. Fine finish wet sanders either pull water up to the surface by suction (caused by the rotation of the pad) or force-feed the water by connecting the sander to a faucet. Because the water will flush the surface completely, the chance of dragging a lump of melted clear across the finish is minimized.

The downside of wet sanding is that it’s messy, it can rust the tool’s components and it’s potentially dangerous when the floor gets slippery. One solution is to wet-sand using a spray bottle of water to flush the swarf away. If you prefer to dry sand, make sure to use plenty of interface pads, which act like a cushion and soften any contact between pad and work surface. Vacuum attachments will also serve to collect any hunks of swarf before they can damage the clearcoats –  and keep the shop much cleaner too.

It Won’t Work Because…

I’ll bet you hand-sanding advocates were mentally collecting arguments as you read this story. “It won’t work because…” is what I often hear in my seminars. The fact that a painter spends about 33 percent of his or her time at work sanding something seems unassailable. Getting more work done each day pays dividends in both profit and cycle time.

This is my 40th year in our industry, and I’ve seen many shops profit by endeavoring to power-sand at every opportunity. Spend the money for a quality tool (there’s no shortage of top-quality sander manufacturers.) Use the expensive sandpapers with the latest lubricants, and practice power sanding scrap parts before you whale away on a 2010 BMW hood. I’m confident you’ll be more productive if you can minimize hand-sanding. Mechanize the task!

Quality sanders will last a lifetime. Their tighter-fitting parts
consume much less compressed air, which makes them cheaper to operate.
Tools with wear plates, sleeved vanes, isolators and bearing cups can
be rebuilt very reasonably.
Shop carefully for the appropriate elliptical pattern (3/8-inch,
3/16-inch, 3/32-inch), expect to spend between $125 and $200 for a nice
tool and look for an opportunity to try the sander in your shop at no
obligation.

Writer Mark Clark, owner of Professional PBE Systems in Waterloo, Iowa, is a well-known industry speaker and consultant. He is celebrating his 22nd year as a contributing editor to BodyShop Business.

Why You Should Replace Hand Sanding with Power Sanding