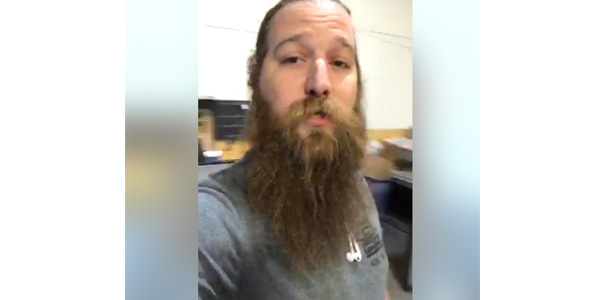 When an insurer insisted that shop owner Clay Hoberecht use all aftermarket parts to repair a 2016 Ford Fusion, he did just that – and showed the end results in a viral video.

Clay Hoberecht is fed up with fighting insurance companies over repair procedures, and he’s not going to take it anymore.

Hoberecht, owner of Best Body Shop in Wichita, Kan., recently channeled his frustration into a live-streaming Facebook video, in which he shows what can happen when a collision repairer follows an insurer’s repair recommendations to the letter.

When the insurance company wouldn’t budge, Hoberecht decided to prove a point.

Hoberecht adds: “That is exactly what we did on this car – and it does not work.”

In the Oct. 6 video, Hoberecht walks around the vehicle to show the results of the insurer-recommended repair job, pointing to obvious gaps, the too-tight bodyline, the ill-fitting hood and the grille that “won’t even clip into itself.” 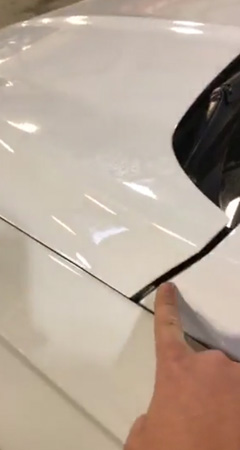 “We have to prove that the parts they want us to use are not likewise in quality, fitment and performance,” he says. “If you guys have seen this video, I think we can all agree that it’s not likewise in quality, fitment and performance. This is a 2016 with 20,000 miles on it ­­– the body lines did not look like that [when the vehicle was manufactured].”

According to Hoberecht, the Farmers Insurance agent gave him a list of local body shops that would have “zero problem” making the aftermarket parts fit on the collision-damaged Ford Fusion. That didn’t sit well with Hoberecht, who believes that either the insurance agent isn’t being honest, or that there are “a bunch of shops that are making this crap metal work.”

“I’m going to make sure this car leaves our shop correct,” he says in the video. “The lines are going to be correct. It’s not going to have that junk metal in there. I’m not going to be cutting and twisting and bending metal to make it fit. If I would’ve built this out of OEM parts in the first place, this car would already be done.”

‘The Consumer Has All the Power’

Just three years into being a body shop owner, Hoberecht has come to the conclusion that “the whole industry is screwed up.”

Shops that are committed to proper repairs often butt heads with insurers that want the repairs performed as cheaply as possible. Then there are shops that try to squeeze every penny out of their insurance partners, and consumers who try to game the system by foregoing repairs and pocketing the insurance payout. (In the latter case, Hoberecht says he’s quick to tell customers that they’re committing insurance fraud and that they need to get off his property.)

If you’re not convinced that it’s a broken system, consider that insurance adjusters have told Hoberecht: “Don’t forget who you work for.”

Indeed, Hoberecht believes that some shops have forgotten who they work for. But it’s not the insurance company.

In light of his recent experiences with Farmers and other insurers, Hoberecht said he’s making a “massive change” to the way he does business, and it’s all focused on the consumer.

Fed up with being “a communication business rather than a repair facility” ­– referring to the never-ending back-and-forth of estimates between the insurer and the shop – Hoberecht said, “I no longer pay attention to the insurance companies.”

“I repair the car as a contract between me and the customer, and the insurance company is a third party,” he told BodyShop Business. “Therefore, I’m not going to key in their estimate anymore. I’m not going to follow their [repair] procedures.”

Now when Hoberecht writes an estimate, he calls the consumer first. He gives them the total and explains the damage assessment, reminding them that his shop is liable for all repairs. Although he reminds the customer that they’re liable for all payments, he explains to them that they have a policy through X Insurance Company, and asks for their permission to send the estimate to the insurer.

If the insurer balks at the estimate, Hoberecht urges the insurer to talk to the consumer. “Generally what people don’t understand is the consumer has all the power – because they’re the customer.”

After Hoberecht posted the video, Farmers Insurance told him that the insurer will reimburse him to repair the Ford Fusion with OEM parts. Hoberecht said he plans to produce a follow-up video thanking Farmers “for doing what’s right.”

“It’s just too bad that they made our customer wait an extra two weeks when that car could’ve been done a week ago.”