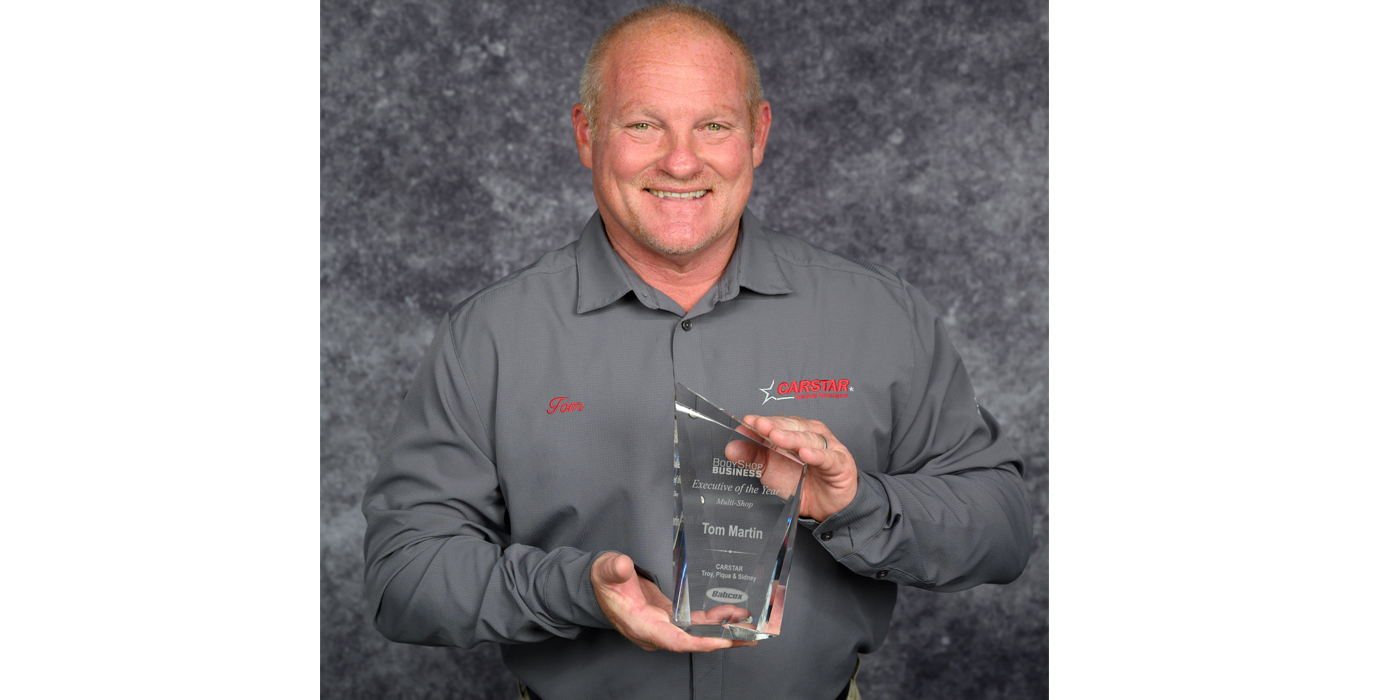 For the 36th consecutive year, BodyShop Business has recognized distinguished collision repair facility owners and managers with its Executive of the Year award.

The awards are given to true collision repair visionaries; individuals who have experienced great success by being forward thinking, overcoming challenges and persevering. Winners are selected based on experience, special achievements and involvement within the local community and collision repair industry.

This year’s Single-Shop award winner is Tony Adams of Weaver’s Auto Center in Shawnee, Kan., and the Multi-Shop winner is Tom Martin of CARSTAR Sidney, CARSTAR Troy and CARSTAR Piqua in Ohio.

Can You Believe This?

Upon learning that he won the 2020 BodyShop Business Single-Shop Executive of the Year award, Tony Adams, general manager and partner of Weaver’s Auto Center in Shawnee, Kan., shared the voicemail with his wife.

“Can you believe this?” he exclaimed.

Adams expressed his immediate sentiments of being honored and humbled, noting that he wouldn’t be where he is today without his dedicated team.

“I think it shows the team that it’s not just me talking with my crazy ideas, other people see it too, and then recognizing it can be a pathway for greatness for them or for my team in the future,” Adams said. “My team is like family, or an extension of my family. I’m really here for them. We’ve got some people within the organization that have been with me for over 20 years, and we have grown together.”

Growing up in the industry alongside significant mentors has helped influence Adams’ career in collision.

“My father was a collision repair technician in the 80s and 90s, and I spent my summers with him,” Adams said. “I eventually got a job with Weaver’s Auto Center, sweeping floors and cleaning up the shop, moved up to a porter, then I took over as parts manager, production and general manager before finally becoming business partners with John Weaver in the mid-90s.”

Working alongside his technicians to become a lean shop and receiving PPG Green Belt training to improve production processes, Adams learned to lead with the help of a business coach.

“Along the way, I got introduced to a business coach who is now one of my best friends, Kevin Wolf of Leader’s Way, and I became really passionate about the journey of understanding the difference between management and leadership,” Adams explained. “I always used those words interchangeably, not knowing that they were really two different words and connotations.”

Through his leadership journey, Adams received his certificate in coaching and traveled the country to help other business leaders become better versions of themselves, ultimately applying his training to his own shop to help his team succeed.

“My views on leadership really transformed my views on how to grow and educate and lead a team and help them,” Adams said. “I think that when we all show up, I’m not ‘Tony the business owner’ or ‘Tony the leader’ or ‘Tony the coach,’ I’m just Tony. I think that when we ask people to check that stuff at the door and put on this face, it’s just not realistic. Being a leader, especially in today’s climate, creates psychological safety. We come in and show up and are granted permission to fail and make mistakes in order to learn and grow. All of those things play an important role in helping teams be successful.”

Identifying the strategies of major companies like Apple and Southwest Airlines, Adams built his organization around influential people who are leaders in their respective markets.

“We’re in the business of fixing cars, but there’s a lot more that we can learn from outside of our industry, from other leaders; there’s a lot to try to model and pay attention to,” Adams said.

Of those models, Adams chose to focus his business on the things that matter most to him.

“We’ve got a really awesome team here. I don’t know that I’m worthy of the Executive of the Year title because we’re really an employee-first organization,” Adams said. “I believe, at the end of the day, only two things really matter: the employee experience and the customer experience. If those two things are good, revenues and profits will follow.”

Adams is the vice president of the Kansas Auto Body Association and is on the Society of Collision Repair Specialists Board of Directors and Collision Industry Conference Talent Pool and Education Committee, just to name a few. Within the industry, Adams noted that it is sometimes difficult to name all of the organizations that he is involved in at any given time.

“It’s a wonderful industry. I don’t know what other path I would take if I had to go back and choose,” Adams said. “I don’t know that I woke up and said, ‘This is what I want to be when I grow up,’ but I morphed into it, and it’s something different every day. It’s never stagnant. The people, the customers, the employees, the vendors – it’s unbelievable. It’s a great business, and I don’t know that I would have picked anything else. Thank you so much. I really admit that I’m at a loss for words. I’m honored.”

Starting at the Bottom

To say that Tom Martin’s foray into the world of collision repair was a fortuitous accident is an understatement. He was actually hired to paint a body shop, and the owner offered him a job.

That was Sidney Body Shop in Sidney, Ohio, and he was 15 years old. He started by washing cars and never left, slowly working his way up the ladder. He bought the business in 2002, then joined CARSTAR in 2003. He built a new store in Sidney and opened it in 2004, then built and opened a store in Troy in 2014 and followed that by purchasing an existing shop in Piqua in 2018, remodeling it and opening it in 2019.

Martin was quite shocked when he received the call that he won the 2020 BodyShop Business Multi-Shop Executive of the Year award.

“I had no idea I was even nominated, I was totally surprised,” Martin said. “I was shocked and thought I heard wrong on the phone; there was no way I was hearing correctly.”

Martin did not realize the past winners he was joining, collision industry legends such as Dick Cossette, Russell Verona, Dick Schoonover and others – many of whom are in the Hall of Eagles, the collision industry’s hall of fame. This is why he was so humbled and honored to even be considered for the award, let alone receive it.

“I am familiar with those names, and to be totally honest, I don’t feel I’m even in their league, so to be mentioned with them is an honor,” Martin said. “Winning this award is something I never imagined possible.”

Committed to the Trade

Despite all the hard work and blood, sweat and tears it took Martin to get to where he is today, he would do it all over again and join the auto body trade if given the chance.

“I would take the same path without hesitation,” Martin said. “I have been very blessed to have the opportunity to own my shop and join CARSTAR. The combination of the two have been great for my family, staff and community. I couldn’t imagine doing anything else.”

Besides the Executive of the Year, Martin has a whole list of other accolades he has earned over the years from CARSTAR:

“The biggest accomplishment so far, though, is being able to provide a place for my employees to work and provide a nice living for their families, along with the ability to help our community be better by giving back with time and resources,” Martin said.

Giving back to the collision industry has always been important to Martin. He serves on the local I-CAR board in the Dayton, Ohio, area and is also an advisor to the auto body program at a local vocational career center.

Martin is active in his business community through the local Rotary chapter, as well in the local chamber of commerce. In addition to participating in national CARSTAR-led fundraisers for cystic fibrosis and NABC Recycled Rides, Martin is committed to giving back to military veterans. With Wright-Patterson Air Force Base near his locations, there are a number of military members in the community who are looking for good jobs when they complete their military service. And Martin is more than happy to hire them. Today, he has three veterans working at his locations.

“Most didn’t have collision repair skills when they started, but working with the CARSTAR University, I-CAR and other training resources, they have been able to learn how to paint, do body work, handle estimates and work with customers,” Martin said. “They stand out for their ability to get the job done – and done correctly.”

Martin plans on sharing the news about winning the award with employees, customers and colleagues and displaying his new hardware at one of his stores.

“I’m always happy to share with my employees what we have been able to accomplish. Even though I get to receive this award, my staff was actually the one that earned it.”

Advertisement
In this article:executive of the year, executives of the year

Management: A Strategic Battle Plan for Your Body Shop

Management: Gearing Up for the Big Game

Divide and Conquer: The Insurer's Way

Does Your Collision Repair Business Run You?

Traits of a Successful Leader
Connect with us