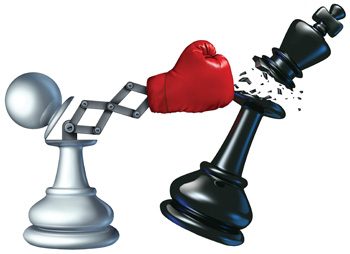 In a world where Walmart and McDonald’s reign supreme, it’s sometimes difficult to even see the mom and pop shops of yore beyond the bold red letters and golden arches that seem to adorn every other block in America. But we as consumers know they’re out there, and they still retain their own loyal followings to stay in business and stave off competition.

As members of the collision repair industry, we often divide ourselves into two categories: the big guys vs. the little guys. But what about the in-betweeners? What are they doing to keep their businesses thriving and out of the hands of mega consolidators?

Ask Pat Beavers, managing partner of CollisionMax in Philadelphia, and he’ll tell you that his business’s experience and knowledge of their market gives them the upper hand. Since its inception in 1977, the business has grown to 11 locations between Pennsylvania and South Jersey. With Service King’s recent purchase of Sterling Collision Centers, the large-scale consolidator will be moving into CollisionMax’s area, which means it could potentially disrupt their relationship with insurance carriers.

“As we view it, the ‘Big Four’ all have national relationships with insurance companies and we are a pro-direct repair organization,” said Beavers. “So we are concerned that [Service King] could have an impact on our claims and customer base. The high-level relationships they have could impact our relationships that we’ve worked to develop for years, but that’s the unknown for us.”

Despite this concern, Beavers is reassured that CollisionMax will uphold its longstanding presence in the Philadelphia market.

“We’re local, family owned and operated, and we’re not a franchise,” said Beavers. “Almost a third of our people have been with us for 10 years, so there’s a strength over a new corporation that’s not from the market and doesn’t understand some of the market nuances. We can touch our 11 locations in any given day, so we’re accessible to all our stores because of proximity.”

To maintain that feeling of proximity, Beavers regularly meets with his management staff to discuss performance and how to maximize the business in its market as much as possible, which includes expanding the company’s brand identity.

“We’re working on our name in our market and having some top-of-mind presence with the retail consumer so they identify us in the markets we serve as the shop of choice,” he said.

Forming Alliances
Beavers also points to another unlikely reason for CollisionMax’s success: his current, local competition. By keeping an eye on one another, CollisionMax and similar well-established shops in the area have been able to stay on their toes and create their own exclusive and competitive marketplace.

“If we didn’t have some of the good operators in our market already, we probably wouldn’t be as advanced as we are,” he said. “I think because of our competition locally, we and our competitors have made a market that may not be that easy to come into and take over because we have all watched each other and didn’t ignore each other – and our companies got better as a result.”

“They’ve always had great prowess in terms of marketing, and they’ve been able to strike big deals with insurance carriers,” Fish says. “That gives them great precedence over other MSO organizations, and that’s always a challenge.”

Fish has been in charge of Coast since 1996 and now owns four locations in the San Diego area. He attributes his success to implementing lean practices and Six Sigma in his business, but also allying with Fix Auto.

“Being aligned with Fix Auto allows me to have my cake and eat it, too. I’m the owner and operator of four body shops. If I were branded on my own, I would have felt the market demand to be up to six to 10 body shops, so [my alliance with Fix Auto] will allow me to grow at a pace I feel good about.”

Fish says that aligning with the Fix Auto name will give his shop boosted marketing power as well. In addition, he’s linked to a number of “peer shops,” which grants him opportunities to scope out the friendly competition and gain ideas as to how to improve his own business model.

“When you see someone doing something notably better than you time in and time out, there’s a paternal feeling there that allows you to reach out to those shops and ask how they’re doing it so much better than you,” he said. “You might end up even going to visit them to share their best practices, and that collaborative atmosphere is something that’s very powerful.”

Eye on the Competition
Fish believes in acknowledging the competition rather than ignoring it.

“I think ignoring the competition is shortsighted and would prevent you from learning about some innovation that a competitor might be bringing to the table,” he said. “Having said that, I wouldn’t spend too much time focusing on it. We’re focusing on our own level of excellence, knowing full well that if we achieve that there are very few competitors who can keep up.”

However, like many businesses, some worries still creep up in the back of his mind.

“I’m a buyer, so the thing I worry about now is the fervor that’s happening in the marketplace in terms of valuations. With Service King coming through the market recently through the acquisition of Sterling, and Caliber continuing to expand in Southern California, you would think they have enough market positioning in the area, but apparently they don’t think so. I hope I don’t get priced out of the valuation marketplace.”

Still, some shops say that large consolidators haven’t had any impact whatsoever on their respective businesses. For Jacob Nossaman, owner of Collision Works in Del City, Okla., the key to keeping neighboring giants Caliber and Service King away is to implement a strong company culture and employee environment.

“I feel that if you focus on your organization with 110 percent each day, then the competition is not an issue,” he said.

Established by Nossaman in 2001, Collision Works has grown from two to four locations in its marketplace. One of the factors that allowed his business to grow was using a management software platform that’s specifically designed for large single-shops and small MSOs.

“The management software is also your accounting software, so you do everything out of it,” he said. “It improves accuracy and allows you to look at multiple locations off of your PDA. You can be anywhere and you’re still at your office.”

While Service King and Caliber have more buying power as corporations, Nossaman is confident that Collision Works’ stable, small business model will give him the advantage.

No Threat in Sight
While consolidators continue to sweep across the nation, there are still some parts of the U.S. that haven’t yet felt the impact. Conner Brothers in Richmond, Va., is a small, family-owned business with four locations and no mega-consolidator in sight. But that doesn’t mean it’s not on owner Kevin Conner’s mind.

“We’d have to step up our game if they did come to town,” he said. “They could really take a lot of work from us.”

Although the shop is out of the hands of consolidators for now, Conner says he still wants his staff aware of the potential threat they pose. He meets with his manager every few weeks to discuss strategies that can help to improve their business model – and keep the big guys at bay. Because according to him, losing to the competition stems from ignorance – something he doesn’t want to succumb to.

“Having not experienced [consolidation in our market], I think my biggest fear is ignorance. We don’t know what to fear.”

While some might turn a blind eye and deny the fact that consolidation is indeed a threat to many shops, Conner says he actually looks forward to learning more about the topic.

“If you don’t know your competitor inside and out, all you’re doing is setting yourself up for defeat. They’re going to eat you alive.”

These four businesses each shared one commonality that’s allowed them to keep mega consolidators at bay: the involvement of an active and proximate owner-operator. And as long as their owners stay active, the customers will keep on coming.

“I plan on being in the business for many years to come, so the prospect of selling my company isn’t on the table,” said Fish.