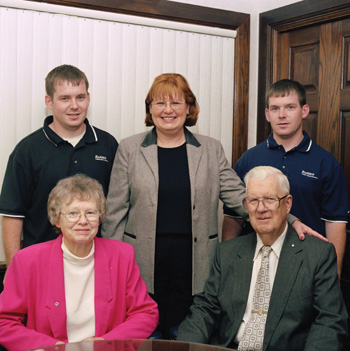 Whether it’s a mom-and-pop restaurant, a family-owned farm or a husband and wife duo operating a local karate studio, there’s something undeniably different about a family-operated business. The same can be said for body shops.

In an environment where the clientele often experience an overwhelming amount of stress, a feeling of comfort just might be the trick to gaining and retaining customers. Sometimes, the best way to make patrons feel at home is to bring the home into the business, but this decision shouldn’t be taken too lightly. Read on to discover the ups and downs of working in a family business – and decide if it’s right for you.

Sense of Family
DeLee Powell, president of Baker’s Collision Repair Specialists in Mansfield, Ohio, works alongside her twin sons Chris and Charlie. A family-owned and operated business since 1953, Baker’s has a longstanding history in its rural, small-town location. The guys both have been working at the shop since the late ’90s/early 2000s, and now hold esteemed positions in the company. Chris serves as an estimator and sales manager, while Charlie oversees the shop’s production.

“Sometimes, they refer to me as ‘The Dictator,’” jokes Powell, who says that the shop’s atmosphere is a bit more laid back than others. “I grew up in this business ever since my dad started it. Our home was right next to the business. And right now, two days a week after school, my grandson comes into our customer lobby while he’s waiting for his dad to get done with work. Customers feel that whole sense of family…and that’s how we try to treat not only our customers, but also the other employees.”

For the Powells, a combination of clear-cut expectations and effective communication is the winning ticket to a successful family business. Segregating the roles between a parent and a boss can help save a lot of headaches, while setting clear goals for family members (as well as other staff) encourages personal growth.

“You really need to make sure that when you’re bringing someone in for the first time that the staff knows you expect your children to pull their weight,” says Powell.

While mom and sons work in close proximity at Baker’s, other families have a different experience in their shops. Dingman’s Collision Center, an Omaha, Neb.-based multi-shop operator, is one of these. As the shop is currently in the process of adding a fourth location, the family of five is so busy that they hardly see each other.

“Between all the locations, it’s not like we’re all sitting in the same office,” says Andy Dingman, general manager. “With everybody’s schedules and running around, I see them more outside of work than I do inside of work.”

For the Dingmans, the biggest benefit of working together as a family is the value of trust. The business is a huge part of the family’s identity, but they try to keep things as objective as possible while on the job.

“We have to operate as a business, and we all have responsibilities and jobs to do,” Dingman says. “So we have to continually hold each other’s feet to the fire, and ultimately we have to be the example of what our employee should look like. We have to hold ourselves accountable to the same level we would like our employees to be.” 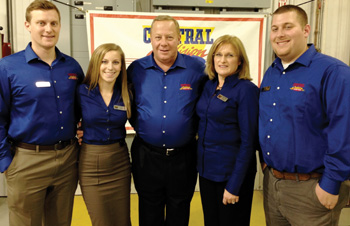 A Family Colony
For Central Collision, a business with six locations in the greater Chicago area, it seems that husband and wife Mike and Nancy Caruso have rubbed off on their staff. In addition to bringing their children on board (daughter Marissa works as the company’s public relations manager, while sons Matt and Michael work as facility managers), the company employs several other families at its Oak Forest location, ranging from a father and daughter duo to a stepfather and stepson.

“I think it says a lot about the employees that they would want to bring their family here,” says Marissa Caruso. “They think it’s a good environment and they want to share that with their family. They trust that their family is going to be taken care of, and it’s a good place to be.”

“I think it creates a higher level of customer service,” says Caruso. “When you’re working with your family, it kind of makes you want to work harder. I want to work hard to make my family proud, make myself proud and make everyone who works here proud.”

Unfortunately, other family-owned shops aren’t as successful. Powell has had the opportunity to explore other businesses through her Sherwin-Williams A-Plus Network membership, which has been a learning experience for her and her sons. 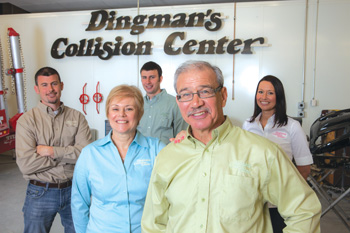 Strictly Business
Although a family atmosphere can put customers at ease, it’s important to maintain a business-like mentality. While some may believe that relatives would be more apt to slack off on the job, Powell says she’s actually harder on her sons than other employees.

“We were very upfront with them,” she says. “We told them, ‘You have to understand because we can’t show any privileges to you or give you a softer job or easier way to go. We expect you to really pull your weight.’”

Caruso echoes these sentiments. A recent college graduate with a degree in public relations, she created her position from the ground-up upon completing her education. While some may think that would allow for flexibility, Caruso says it’s actually the opposite.

“My parents have always instilled in us that we have to learn our place and that we don’t get special privileges. We have to work 10 times as hard as everyone else to make sure we earn everyone’s respect.”

To prove herself to her family, coworkers and customers, Caruso aims to communicate as effectively as possible.

“I want to make sure that everyone knows what I’m doing at all times and why I’m doing it and how it helps,” she says. “I think there is a stigma that people who work for their parents or their family didn’t work hard for it. It makes you work that much harder to prove that you earned your spot just like everyone else did.”

Powell says that fellow employees were initially a bit leery of her sons coming into the shop environment, but over time they took notice of their work ethic. She also tries to encourage as much growth and development with her sons as she can.

“I really like to make decisions by guided discovery as much as I can where I get everyone involved and we can get a consensus, so I try to manage that way. I try not to manage by fear or mandate. I really want to understand why they think their way might be better.”

Quality Time
It may be a bit difficult to separate work from play, which is why it’s important to delegate quality time. Powell strives to spend time with her grandkids at least once a week, while the Carusos enjoy catching up on each other’s personal lives at home.

“Sometimes I envy the people who can be the stay-at-home grandmas and watch the kids. You just have to balance that; you have to have real quality time,” says Powell.

For relatives who are interested in getting involved with the family business, Dingman emphasizes that it’s important to be not only educated, but also passionate.

“Experience all of what the business is, from bringing cars in, to washing them, to sweeping floors. Really get a feel for what the business is about and how each position and job affects the other.”
While entering the family business isn’t something to go into blindly, Powell says that the pros significantly outweigh the cons.

“It’s a challenge, but it’s a much bigger blessing that you get to work with your family,” she says.

Consultant Daren Fristoe of The Fristoe Group thinks that having a business influenced by family is a good thing due to the old saying that “blood is thicker than water.” “You have an employee who is loyal to something beyond a paycheck,” he says. But he also sees a negative side.

“I like to use the theory, ‘Don’t hire someone you can’t fire,’” he says. “It’s very hard to fire your kid because you’ll tolerate a lot more. As the boss, you may tolerate a less-than-stellar attitude, attendance or productivity because it’s my kid or my spouse, so I think you just skewed the business model. So when you start adding other people, the problems start because I’m treating Tommy different than Darren.”

“The theory is that I can say anything I want to you as an employee because you’re also family, so you eliminate the areas of, ‘You’re discriminating against me,’ or, ‘You just said something completely hostile to me.’”

Another pro to making work a family reunion, Fristoe says, is that everyone knows your style, language and way of doing things.

“There’s no honeymoon period,” he says. “You already know me and my expectations if you’re my son, daughter or spouse. But I think that’s also a con. You’re in the business, so maybe there’s an expectation that you’ll be easier on me because you’re my mom or dad. I do know your styles, and I also know sometimes when you bark, there’s no bite. Because of that, there could be a different level of accountability and/or respect for the boss.

One challenge not to be overlooked when it comes to involving family in a business is the succession plan: who’s going to take over when Pops retires?

“The pro is, I want to pass this business on to my son or daughter, and they have been here, they know the business and know how to do it, and they know how I did it and the mistakes I made,” says Fristoe. “The negative side is if they aren’t worthy or you don’t want to pass the business to them, then what do you do? Looking for a third party to buy the company out from under the kids gets messy.”

Perhaps Fristoe sums it up best when says: “It’s kind of ‘buyer beware’ if you’re going to open a business and fill it with family members.”