Serving on your local vo-tech advisory board will give you the inside track on hiring the top students in the class. 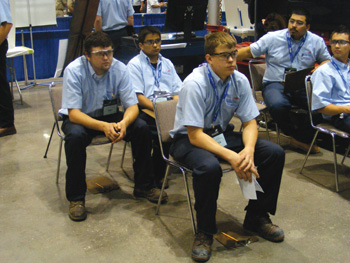 My grandfather, who sold auto parts in the early days of cars, said if your business made a living from a community, you had an obligation to give something back. It made sense to me then and still does now.

One way to give back and improve your own business at the same time is to volunteer at your local auto body vocational program. High schools, tech schools and community colleges that offer education for people interested in entering our business need your help.

Cries of Woe
I’m in my 44th year in our industry, and in every single one of them, a recurring cry of woe has been, “Where will new technicians come from?” I heard it in 1970 from the World War II Navy vets who learned body work from two uncles: Uncle Sam, and their favorite uncle who owned a shop. They were absolutely certain no young person could ever learn to run lead or braze panels like they could.

I heard the wails again when the unicoupe car appeared on American assembly lines. Where would techs who could MIG weld and plug weld come from? I heard it again recently at the auto body advisory committee meeting at my local community college: “Where will the new technicians come from?”

I’m fully aware of the statistics that say younger people are less interested in cars. Electronics, computers and laser rays are much more interesting than collision repair. It’s hard to argue with that, so where will the techs come from? How about from the current and future student bodies in your neighborhood vo-tech program? These kids voluntarily enrolled in our trade. They wanted to learn how the repairs are performed on vehicles. It’s hard to say they mistook the refinishing classes for Roman History 101; these are people who want to do the work we need done.

Negative Attitudes
Sadly, most shop owners I talk with have a low regard for graduates of local programs. Certainly, some programs are better than others – better funded, better instructed, provide better job placement, etc. So those definitely turn out better-equipped kids than others.

But one of the significant distinctions that the local shop owner often misses is the huge difference between “attending” the auto body program and “graduating” from the program.

In too many of the stories I hear from shop owners who explain why they detest their local programs, they tell me earnestly of the time they hired a vo-tech kid and _____. Fill in the blank. The problems are always around the new kid’s poor skill set, work ethic or attitude, and the shop owner ends up saying he’ll never hire another person from any program. And he never does. Most likely, the poorly performing kid was not a graduate of the program. Graduation from a good program means things like regular testing of skill sets, consistent attendance records and a realistic expectation of their first jobs.

No program will ever be able to turn out seasoned auto body technicians. They get seasoned by working in a body shop! But wouldn’t you prefer to start with the kids who learned how to do things correctly rather than some other kid with two years’ experience in one poorly run shop down the road? Neither one of those kids will be pulling a late-model Jaguar back to square or blending a sail panel on a new Mercedes anytime soon. They’ll be doing the grunt work that makes them seasoned. Both want into our industry, which is a good thing, but only one spent the time and the money to get educated on collision repair.

Instructor Woes
I can hear some of you saying, “The instructor at my local program is a former [employee, competitor, lifelong enemy], and he doesn’t know anything about anything!” You have to want to be a vo-tech instructor. I’ve met lots of them, and they’re usually older, former technicians who wanted two things: to slow down from the frantic flag-hour racetrack, and to make their school’s current auto body programs better. What they soon face is a maze of local, county, state and federal regulations about who, what, when, where and how much it will cost to provide useful, compliant and legal vocational education.

You think your shop has red tape and Catch 22-style issues with some of the insurers you deal with? Red tape lives and breeds in publicly (or privately) funded vocational education. What made the most sense locally wasn’t necessarily the decision of distant bureaucrats and legislators.

I’ve seen many newly hired auto body instructors who are soon disappointed when they find out that the educational hierarchy and volumes of compliance rules make their ideas about speedy program changes impossible. But you can help them. Vocational advisory boards are a key part of every vo-tech program. In many cases, one of the many educational rules is that the advisory board must be made up of current members of the appropriate industry.

Change From Within
My experience is that it’s pointless to try and change things from outside the decision circle. Instead, you have to change the decision makers’ minds. You can complain to your peers over cocktails about the quality of the local auto body program graduates, the lack of instruction by the lazy instructors and just how far out of touch the program really is, but it won’t change the program in the least. Bringing it up at the next advisory board meeting will at least give you the satisfaction that they heard your issues and have the ability to make changes to their program. Whatever your local program’s current faults, it’s filled with kids who want to get into our business.

I’ve been on my local auto body advisory board for 44 years, off and on. I delivered the first air compressor to their first rented building as a kid with my dad. I’ve known almost all of the program’s instructors when they were actually working in the industry. To a man, they honestly wanted to teach kids how to make a good living doing collision repair.

Some instructors were painters during their time in real shops, while others made their employer’s frame machine sing until they couldn’t climb all over it anymore. Several had shop management experience before their turn as instructors.

The vo-tech shop moves at a slower pace than a busy collision shop, and that may seem wrong to you. Want to slow your shop’s routine down to match? Imagine having to teach all your employees everything about their job tomorrow morning because they just got out of high school and have never seen a cheese grater or an idiot stick, much less a D/A or a Porto-Power. Talk about herding cats – and cats with an enormous excess of hormones and a stunning dearth of common sense!

A Little Secret
I’ll share a secret some of the smartest operators I know in this business always employ. While all the kids who enrolled in the auto body program planned to be huge successes, only a few of them really excelled. The top students in the class have the grades, skills and discipline to become great techs. Well, you say, I would hire those kids if I knew who they were. You know where they went to work? They got hired by my smart shop friends who serve on the advisory boards, have the ear of the instructors, provide part-time work for good students and always hire the best ones before they ever leave school. Those shops hired some young and hungry techs who have already seen how collision repair is correctly done.

For sure, our industry needs new technicians. Rather than trying to teach a kid with a degree in English or a history of flipping burgers to hang a fender, hire a kid who graduated from a vo-tech program in auto body. Want the best kids? Get on the advisory board and meet them.

Mark R. Clark is owner of Professional PBE Systems in Waterloo, Iowa. He’s a popular industry speaker and consultant and is celebrating his 26th year as a contributing editor to BodyShop Business.

Where Will the New Technicians Come From?