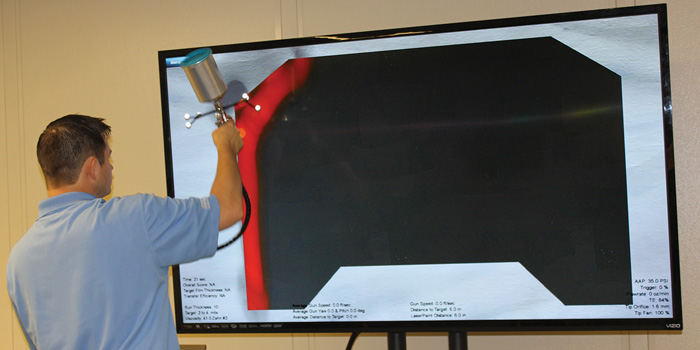 Teaching people how to paint or measuring coating application success using real paint and real parts is messy and expensive. Wouldn’t it be cool to “paint” without these problems?

Trying out VirtualPaint at the Iowa Waste Reduction Center, University of Northern Iowa.

“Developed by the Iowa Waste Reduction Center’s (IWRC) painter trainers, the award-winning VirtualPaint is a highly adaptable virtual reality training simulator that mimics a fully customized painting and coating production environment,” says their website, and is it ever cool!

I first encountered these folks in the 1990s. Their auto painter training program called STAR (Spray Technique Analysis & Research) was a monumental effort to track and improve refinish transfer efficiency. With all sorts of legislation about minimum transfer efficiency (typically 65 percent) ricocheting around our industry in those days, these engineers set about to scientifically measure it.

The “target” was one of the components in their “spray system.” Some of their findings were obvious; it was easier to get high transfer efficiency on a 4’ x 8’ sheet of plywood than it was on 50’ of electrical conduit. Other elements in their spray system were the booth (spray environment), the coating itself (viscosity, mil build required), the equipment (HVLP, pressure feed, gravity) and, of course, the painter. No surprise that improving the painter’s skill set made the most difference in measured transfer.

I was one of the participants in their testing way back then and improved my own results using the same gun, same Honda hood and fender, and same basecoat and clearcoat. My first effort was 51 percent transfer and, after their training, I improved to 67 percent transferred to the same parts.

Their tips to improve painter techniques include having a plan of attack (rather than just picking up the gun and starting to spray), minimizing the lead and lag off the edges, and keeping a very consistent gun angle (yaw and pitch). The single biggest change in transfer efficiency came from closing up the gun-to-part distance, overcoming the wind shear effect that blows the paint away from the parts. This is particularly important in a forceful downdraft air envelope. Their original refinish STAR program could be summarized as follows: lower the air pressure, close up the distance, square the gun angle, strive for perfect 50 percent overlap and minimize lead and lag.

Many years ago, I saw a pilot version of the VirtualPaint technology. There were two laptops hooked in series with a desktop computer (remember them?), and the IWRC folks had to run a big electric fan pointed at the computer array to prevent overheating as the program made multiple calculations at once. In general, the current version works mostly like the original; the goal then as now is to replicate spraying paint from a spray gun onto a familiar target. Doing it electronically meant painter training could be implemented in any classroom or meeting space. That original version tracked mostly the painter’s panel coverage and mil build.

Today’s version ($25,000 complete) has an extensive display down the left side of the screen that will allow setting, measuring and recording all these metrics:

The IWRC’s main customers today are military bases and industrial manufacturers. The military has new recruits and endless things that need to be painted. Teaching them how is the goal of their STAR4D program (4D = For Defense). The facilities they’ve trained have reduced their material costs, had fewer defects and less re-work, and cut down on their hazardous waste. The three-day military training includes classroom instruction, hands-on in the booth but use of the VirtualPaint system first.

Their industrial customers often use the tool for training and screening. In auto body, a person who has never painted cars in a production shop is unlikely to apply for a painter’s job opening. In a big industrial paint department, a posted job opening often gets lots of applicants who say they can paint. Rather than take them on their word, they have the applicant demonstrate they can adjust a gun and paint a comparable part virtually.

One of the coolest things about their virtual spray system is the adjustability. The target appears on a screen in front of the painter, and it can be shaped like a wooden cabinet door or a metal quarter panel or a multi-angle plastic component. The gun the painter holds is the same gun the client uses – airless, air-assisted airless, pressure feed, electrostatic and refinish gravity feed spray guns. In each case, the adjustment knobs on the gun are connected to the computer programming, and opening the pattern adjustment makes the gun’s pattern on the projector bigger. Closing the fluid needle causes less “paint” to appear on the screen.

I went to their spotless research facility at the University of Northern Iowa to see and use the latest version of VirtualPaint. We chose a projection of a generic front fender. The gravity feed HVLP spray gun connected to the computer was one I was familiar with, and we set all the coating variables to mimic a conventional automotive basecoat.

The spray gun has four lightweight outriggers that have a sending unit on each end to track gun angle and distance to the panel. The system makes a spraying noise but does not kick when you pull the trigger; other than that, it is very much like the real thing.

I sprayed a test pattern next to the part on the screen, adjusted the fan and trigger pull to suit myself and “painted” the fender. I could see the wet edge appear as I went and was stunned when I could see gloss as it got wetter. I could make it run and see the saggy curtain appear. I could move the gun closer to the panel without spraying and see its “reflection” in the coating. Wow!

When I said I was done, after touching up an edge that didn’t look right, they flipped the screen display and I could now see the coating’s mil build across the fender, too thin here, too thick there. Their entire program is based on the theory that with instruction and practice, the painter can do better next time.

What an incredible amount of programming and reasoning it took to build this device. Imagine you were manufacturing widgets and could accurately develop a set of coating specs, material costs and completion times without ever painting a part. Seems like this VR method would be money well spent. The IWRC folks are quick to say there’s no substitute for the real thing and that a few hours with their virtual wizardry won’t substitute for live fire, but what a training tool.

Contact Jeremiah Treloar at the IWRC [email protected] for rental opportunities for your next association meeting.

Paint Without Fumes or Overspray