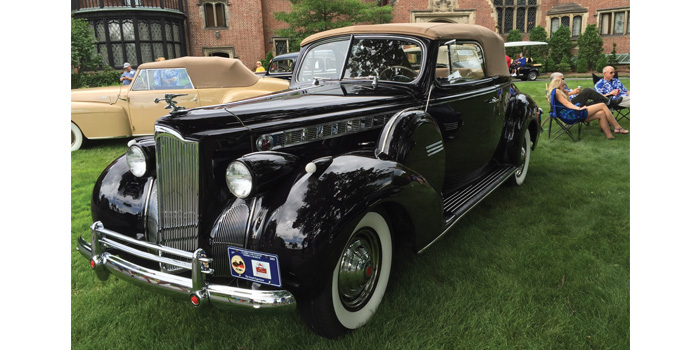 So I reached out to Mom before Father’s Day to coordinate plans. She said, “Are you and your father going to play golf? Because there’s a car show too that we can take him to.” Hmm, car show versus golf. While I am a golf nut, we’ve played golf on Father’s Day for many years, so I said we should go to the car show.

And what a car show it was! It was the 58th Annual Father’s Day Car Show at Stan Hywet Hall & Gardens in Akron, Ohio. On display were 400 classic, antique and collector cars manufactured from 1925 to 1990. As a nod to the 100th anniversary of the historic property (formerly owed by F.A. Seiberling, co-founder of the Goodyear Tire & Rubber Co.), the show had a special class of cars 100 years and older. The Inner Circle in front of the Manor House featured pristine examples of classic cars from 1940 to 1944.

We surprised Dad, never telling him where we were going until we got there. Seeing him become a kid again while ogling the cars and remarking how long it had been since he had seen a Sunbeam Tiger (and there were three of them!) made my day!

And there was so much more there – food, music, the live assembling of a Model T and tours of the mansion. If you haven’t checked it out yet, I highly recommend it.