Move over Bullwinkle, the most famous moose in the Land of 10,000 Lakes sits proudly in front of Quality Paint & Auto Body, and it’s the creation of shop owner Don Lindgren, a.k.a. the “Moose Man.”

Unfortunately, we can’t call him that.

“I tried to use ‘The Moose Man’ as a logo, but the title is owned by somebody in Tokyo and all he wanted to do was sell it,” says Lindgren. “So I came up with the name ‘Minnetonka Moose.’ ”

Named after a suburb and a lake near Minneapolis, the Minnetonka Moose is welded out of sculpted steel and has gotten the shop a lot of attention since Lindgren put it on display
in 2003. 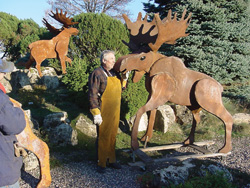 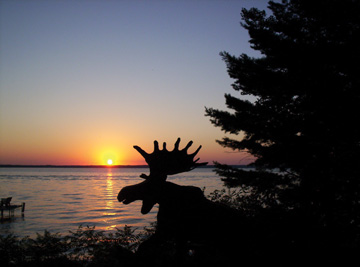 “I’ve probably had a couple thousand compliments on the moose,” says Lindgren. “A 71-year-old man came by the shop and said this moose was about the most beautiful thing he’d ever seen, and he didn’t know whether to kiss it or hug it.”

To date, Lindgren’s welded seven moose (which live all over Minnesota) — a number that pales in comparison to the 30,000 vehicles he estimates he’s repaired during his 45-year career. According to Lindgren, going from sculpting auto bodies to moose bodies was a natural transition.

“Being interested in art drew me to the autobody field. I’ve made things since I was 8.”

Lindgren also has been known to create other animals, like a life-size eagle — with 2,000 individually cut metal feathers.

These days, Lindgren spends only about 5% of his time working on cars (son David is now the shop manager) and 95% of his time doing whatever he wants — which often involves making moose sculptures. “We’ve been here since 1960, and I’ve been in the industry 46 years,” says the 69-year-old Lindgren. “I say I’m semi-retired because I just can’t quit — I’ve got to keep building.”