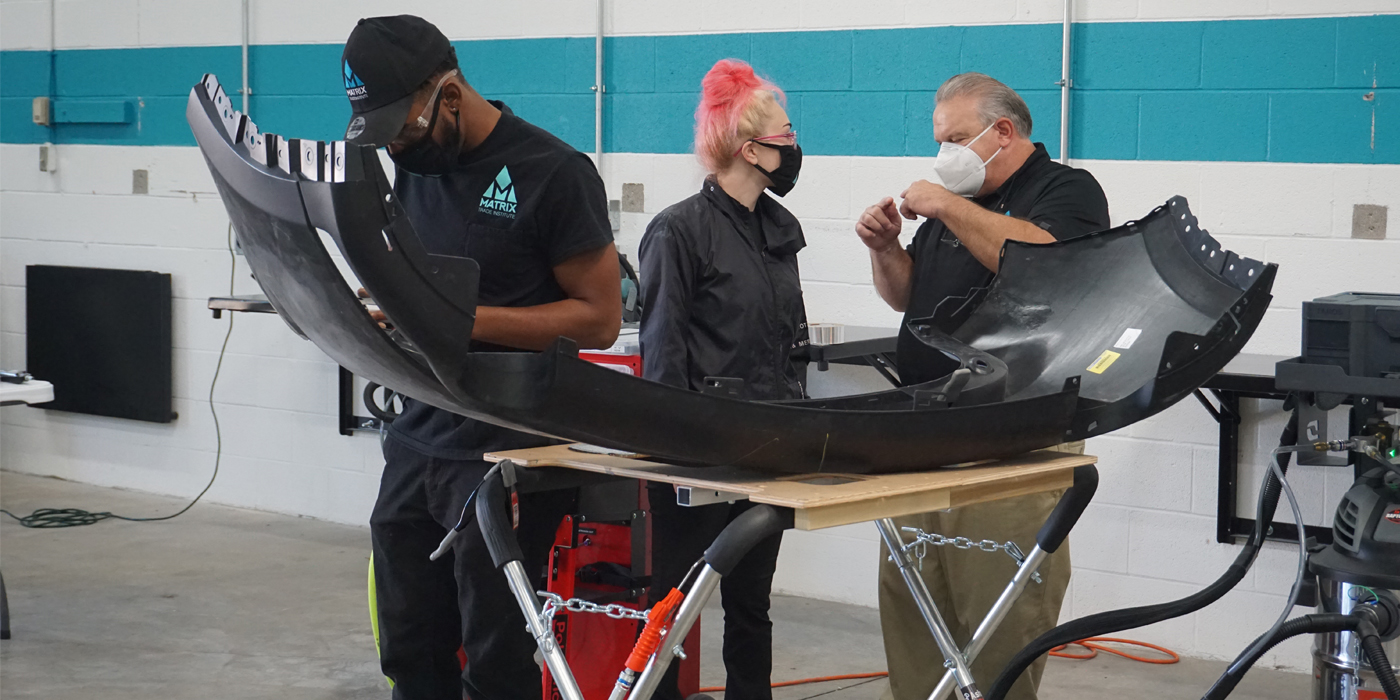 The collision industry is painfully aware of young people’s lack of interest in making a career out of collision repair. A lot of the rest of the world is aware of it too as the plight of all skilled trades and the lack of interest from the younger generation has been widely publicized in the media.

Some may agree or disagree with that statement, but it does shine a light on a problem many have experienced: vo-tech graduates coming out of school and into the shops not having the skills needed to make them productive on day one.

There are two schools, however, that are addressing that problem.

At the virtual Collision Industry Conference held July 22-23, John Helterbrand, department chair, Automotive Collision Repair at Ranken Technical College in St. Louis, Mo., and Dustin Peugeot, co-founder and CEO of Matrix Trade Institute in Beachwood, Ohio, both addressed how their schools are tackling the issue of freshly minted graduates being ill-prepared for the rigors of collision repair.

Helterbrand said Ranken has been working on a pilot program for the last three years. The pilot program was born out of talking to employers and finding that many students were leaving school with few soft skills or a poor work ethic.

“We looked at ourselves and what other schools are going through and saw there was outdated curriculum and delivery methods,” Helterbrand said. “Some were not teaching the skills the student really needs.

“The sad part for students coming to our program is they had no expectations or goals and no one helped them with that. We wanted to bring all that together.”

The other thing Helterbrand discovered among employers was that there was a retention issue. Recent vo-tech graduates would stay on the job for a year and then leave.

“We asked the students, ‘Why are you leaving?’ Apparently, they didn’t understand the culture; it was different than what they were used to. This generation is very much about making a difference in the community and workplace, and somehow they got lost in the whole system, especially since the system had multiple layers of management.”

Even more discouraging, Helterbrand said, was that some employers plucked top students out of school before they finished the program by convincing them that school meant nothing and they could teach them all they needed to know.

“For a student with low self-esteem, that is detrimental for the long-term success of that student because, once again, they feel like they’re not completing anything.”

Helterbrand said he modeled Ranken’s pilot program after some of the automakers’ programs, which were based off of what he called a “foundational model.” He saw how the OEMs kept students motivated and helped them through every step of the process. Students would be given small, simple tasks and then work their way to larger, more complex tasks.

Ranken’s program is eight weeks on, eight weeks off. Some people do five semesters, while some only do four. Some of the topics include safety, teardown methods, plastic repair, R&I and detailing. The goal is to produce a student who can be productive on day one at their new employer.

In some cases, students had been going after internships they didn’t need that had them performing tasks that were too complicated or advanced. With Ranken’s new program, students start off with small tasks so they feel like they’re part of something important, plus they work with a mentor and keep track of their time with the mentor via a logbook. The idea is to get educational institutions and the industry to work together.

“One of the worst things we can do is give someone to a mentor and then the mentor gives them information that is not correct,” Helterbrand said. “We’ve always let the educators do the educating and the people who do the hands-on every day do that because they do a great job at that.”

The logbook students use is basically an operational manual for the program. Every semester, the student keeps track of their progress in the manual, and the college then uses the manual to tell the mentor what the student can do.

“This process allows the mentor to not get overwhelmed because the process is done entirely by the student, who is totally responsible for this,” Helterbrand said.

As part of the program, students also get their own set of tools.

“We don’t want them digging in other people’s toolboxes. We want them to feel like the tools are theirs and they can take care of them and add to them.”

When Helterbrand started exploring the idea of revamping the program several years ago, he was amazed at the support and offers of help he got from various organizations throughout the industry: I-CAR, ALLDATA and S/P2, to name a few. With ALLDATA, students get a free subscription while attending school.

“People ask why this is important, and the answer is for process,” Helterbrand said. “The No. 2 thing we’re teaching students besides safety is making them understand process. An educator without a textbook can’t do much, but if you can take it home, you can do a lot of work on that.”

Helterbrand believes if an appropriate curriculum is not being developed for future students, it’s not going to help the industry.

“We have to maintain a high level of education for students. Our program is a little harder in the sense that we make the students focus on themselves, but we make them lifelong learners. So, it’s all about taking care of the student.”

Dustin Peugeot, along with Richard Blum, co-founded the Matrix Trade Institute two years ago, with the goal of delivering automotive training in a progressive, hands-on, efficiency-based program that feels hip and edgy – the kind of education that students could be proud of and get jobs with.

“The student has to be proud about the training and education they are gaining,” Peugeot said. “We all fight that battle of training to get the best and brightest young men and women to enter the trades, so we have to put forth the effort to make that as appealing as possible, not only to the trainee but for people in their lives who need to support and be proud of their decision. Because the more people who get supported and are proud of their decision to enter any trade, not just collision or automotive repair, the easier all of our jobs get.”

Peugeot’s other goal is to do a better job of growing individuals and providing a plotted-out career path for them so they can best utilize the training they received at school.

“It allows students who graduate from our certification programs to enter shops that understand career development and are better landing spots for new technicians – because if we’re only focused on what’s wrong with millennials, then we’re only attacking half the problem,” Peugeot said. “The industry has to get better too.”

Matrix Trade Institute’s program is unique in many ways, one being that it is 80% hands-on and includes tools.

“If our students aren’t back in the shop 80% of the time, I believe we are doing a disservice to them relative to their ability to instantly benefit employers,” Peugeot said. “Whether students are hired into a flat-rate, production with team pay or hybrid hourly/production pay system, if we’re not teaching efficiency, labor times and the most advantageous ways to beat them, then we’re really not preparing our students for what real life is going to be like.”

With an 80% hands-on curriculum, Matrix has proven it can get students in and out in 20 weeks and they can be valuable to a shop. Students usually gain paid internships by week three, which results in 17-week internships that 95% of the time lead to full-time jobs with those employers.

“We’re not throwing textbooks at them because a) they’re outdated, b) hands-on visual learners don’t thrive with textbooks and c) this generation is a lot more used to interactive, digital media. The ability to assess whether or not Matrix is a good educational choice for them is just as much about their ability to leave school at 1 p.m. and go work until 5 or 6 as it is about their ability to perform repetitions in the program.”

It’s also about feeling valued at work, Peugeot said, on day one of an internship, not just day one of a full-time job. The employer must see the newcomer as a productive new team member who contributes to the shop’s culture, production and flow.

“If we don’t focus on both ends of that union between hands-on education and employment, then it doesn’t matter how good we are, we are missing it,” Peugeot said.

When Peugeot talks to employers about what makes the Matrix Trade Institute different and why they might be interested in his graduates, he first talks to them about how they can get better involved with their current employees and their own development.

“We show them what it’s like to plot a real career path based on training, education and growth so those employees never have a reason to want to leave that shop because that shop provided them the growth they need,” Peugeot said. “Once an employer gets a reputation for prioritizing how they onboard and grow careers, they give their employees a reason to recruit their peers who are dissatisfied with an employer who is not as progressive. That becomes contagious.”

This “development from within” in turn allows shops to recruit differently, Peugeot said. For example, if a shop knows they need a person with skill set A, B or C and they’re able to develop their own personnel to perform those operations, then they can recruit a specific function that leads to increased productivity.

“Instead of having to recruit employees who have experience, employers can recruit talent within their communities and network, knowing full well they have the resource to develop that talent and adapt it to their system to gain more throughput,” Peugeot said.

“The goal is to improve the culture and production through growth and education to make employers an optimal landing spot for graduates who’ve been taught how to perform efficiently in the Matrix program.”

Training and Education: Don’t Be Afraid to Ask OSHA for Help

Training and Education: Budgeting Time and Resources to Keep Training on Track

Trade Schools: Getting with the Program