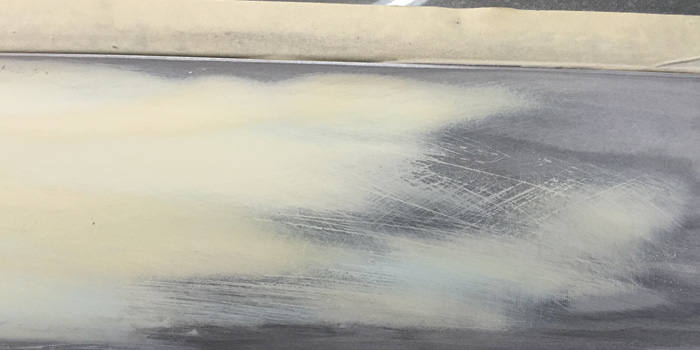 Despite a plethora of expertise and guidelines out there, refinishes still fail due to mistakes in the paint prep process. Here are some common ones.

Not all of us are boy scouts when it comes to prepping a vehicle for paint, and there are a variety of reasons for that. Sometimes we’re lazy, sometimes we rush, and sometimes we feel like we know it all. Sometimes we fall into bad habits, too. The following paint manufacturers have seen it all. Here are the most common paint prep mistakes they see, and how they can be avoided.

In his 30 years in the automotive refinish world, Mark Hebbeler, vice president of sales and marketing for Createx Colors & Auto Air Colors, has compiled a “top five” list of the most common mistakes he has seen painters make when prepping a vehicle for paint. They are:

As far as Hebbeler is concerned, the primary reason why mistakes get made is time.

“They’re like, ‘Aw man, I forgot to put on gloves! No worries, it’ll be OK.’ They rush to get the job done faster,” he says. “In the body shop world, time is of the essence, and the faster you do things, the more money you make. It’s not laziness or thoughtlessness, you just forget things. You’ve done things so many times before, you’re like, ‘Eh, I don’t need to do it this time’ and you forget. Everyone should get into good habits as far as clean surfaces and protection, protecting themselves and protecting the paint as well.”

Hebbeler offered some clarification on the under- or over-reducing phenomena.

Straight-line sanding scratches from blocking that were not removed prior to the final application of filler or glaze.

“As a paint manufacturer, we manufacture things and give our reductions based on our chemistry and calculations, and people will do things based on what they think and then have paint failure, or the paint won’t go down as opaque or as transparent,” he says. “And then they say, ‘Well, I did it exactly as you said,’ and then you tell them to go back and do it exactly this way and then they find out they don’t have that problem anymore.”

Ted Williams, business consulting manager for Sherwin-Williams Automotive Finishes, has been working with MSOs on classifying “redos” and identifying why they happen. When it comes to refinishing, one of the biggest causes of redos is not verifying color before the car gets to the paint shop.

“Some painters are still using cars as test panels,” says Williams. “A lot of this is going on today because of the over-reliance on technology, where painters assume that just because they hit it with a ‘spectro’ or looked and saw the color was verified for the certain make/model of the car, they don’t have to actually check the color.”

Another thing Williams sees is the improper handling of parts, from how they’re put on a vehicle to how they’re handled through the paint shop. Parts are painted and then either dropped, scratched or damaged before being put back on the car.

“A lot of times, shops will spend a lot of money buying parts carts to manage parts in the body shop, but don’t want to invest the money to buy the correct stands for the paint shop, which can lead to dropped or damaged parts,” he says.

The third most common reason for redos, says Williams, is priming and painting over bad body work. Even though the body work has pinholes or imperfections, the painter, Williams says, assumes they can prime over it or put putty into a few spots.

“Then they paint it and bake it, and the heat that goes in the panel causes air pockets and the filler to bubble up and then you have issues. So that is not properly evaluating the body work on it prior to priming and painting.”

Finally, Williams takes issue with shops not applying a “clean room mentality” to the paint shop.

“We spend a lot of time sanding for trash at the end where we could have avoided that in the beginning if we had taken the right steps to make sure the car was cleaned correctly, the booth was clean, the proper filters were in the booth and the painter had a clean paint suit on,” he says. “We’ll waste hours buffing and detailing cars to get the trash out of them instead of a painter putting on a new $10 paint suit that’s not dirty.”

It All Starts in the Front

Here’s a novel concept: that all mistakes in the paint shop actually come from the front of the shop. Just listen to what Bill Warner, technical training manager at Quest Automotive Products, has to say about preparation.

“The problems we have may start in the front office as opposed to ‘sand scratches he missed’ or ‘He didn’t blow something off,’” says Warner. “Maybe you have a manager who hasn’t necessarily communicated to the rest of the techs all that’s supposed to be repaired. Or you don’t have a production manager or lead painter who does that. Or you don’t have a regular morning meeting to discuss the jobs of the day and how you’re going to work on them or who’s going to do what. Mental preparation and communication would alleviate a whole lot of confusion and problems.”

There are two primary challenges Scott Rickard, account representative for BASF, is seeing out in the field that lead to paint issues: blending and tricoats.

Aside from if a panel is sanded too coarsely and sand scratches start to show up, Rickard is not seeing painters get the utmost use out of adjacent panels.

“I can’t just blend in the first six inches of the adjacent panel and expect to have a proper color match at that point,” says Rickard. “I have to stretch that blend out a little further. Blending is something that’s needed no matter what the color is, using the bulk of the panel to blend on because you’re creating an optical illusion.”

Tricoats are another bugaboo, says Rickard.

“Making a letdown panel to find out how many coats of midcoat need to be applied to achieve a proper color match is essential, yet many guys don’t do this,” he says.

Coatings today are more sophisticated, Rickard says, given that there could be 10 to 12 toners to make a color today versus maybe five 20 to 30 years ago.

Rickard offers two other gems: perfect paint jobs often start way back in the process with a proper estimate. And there are only three places dirt comes from: the painter, the booth or the car.

Pete Mahoney’s bane of existence is spritz bottles. You know, the kind that painters use to spray wax and grease remover on a panel. In his mind, it has led to a one-rag habit which causes paint problems galore.

Mahoney lays out this scenario: the panel was freshly sanded or had never been washed with wax and grease remover before the work was ever started (which he says is the case in 75 percent of body shops). Wax contaminants get sanded in because they melt and get into the sand scratches. Then, seven-and-a-half to 10 months later, they work their way up through the basecoat, and little blisters start popping up under the clear.

“This is a direct result of the spritz bottle and one-rag method,” Mahoney says, adding that 10 percent of paint failures where blistering has occurred are caused by this one-rag method.

Another big error Mahoney sees is painters believing if you use an adhesion promoter, you don’t have to sand the panel really well. While that may have been true in the past, it is not anymore, says Mahoney. 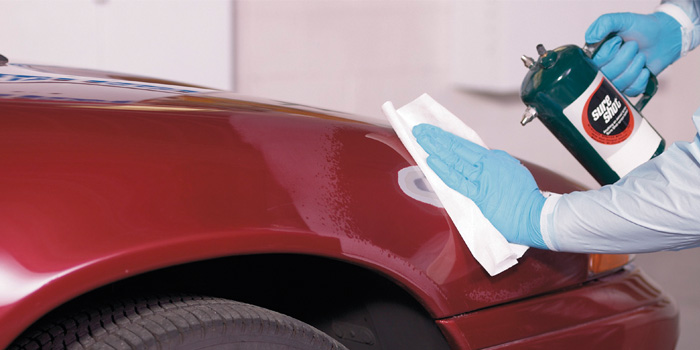 Cleaning the surface with a degreaser using two rags (one wet, one dry) is essential to proper paint prep.

All too often, Ben Sampson, account manager at Axalta Coating Systems, sees body shops wait till a car hits the booth to check color instead of making color check a part of paint prep.

“Color verification needs to be one of the very first things, which most shops are not doing,” he says.

Another glaring issue out there is shops’ incorrect treatment of e-coat, says Sampson, specifically sanding through it and then painting directly on it without sealing it first.

“This will cause it to peel down the road because UV rays from sunlight will come through the clearcoat and basecoat and hit the e-coat and it will oxidize,” Sampson says. “If you don’t seal the e-coat when you go to paint, it will stick OK but then it gets one little rock chip and, after six months, the e-coat under the paint oxidizes and breaks down. Once moisture gets in, forget it – the whole thing starts peeling. It’s a simple thing, but a lot of shops try to cut that step out for speed or cost.”

A couple other mistakes include trying to take care of things like pinholes and coarse scratches in the paint shop that should have been handled in the body shop. Also, not using etch primer every time there is a sand-through.

Not taking the time to remove moldings, door handles, mirrors, etc., is one of the biggest paint prep mistakes Paul Evans sees.

“This can cause unnecessary paint edges as well as dry spray that can lead to poor adhesion and an unsightly appearance,” says the zone manager, business development centers for PPG Automotive Refinish.

Another travesty when readying a vehicle for paint, according to Evans, is not protecting adjacent panels, glass and other non- removable items, which can cause costly repairs if damaged during the repair process.

“Sanding either too much or too little on a blend panel is also a common mistake I see,” Evans says. “Although it is important to completely de-gloss the entire blend panel, the technician should use caution to avoid breaking through an edge, especially where no paint is to be applied.”

What are some of the most common paint prep mistakes Fitz Moles, North American technical manager, AkzoNobel, sees? Nothing that hasn’t been mentioned before:

“Leaving wax and contaminates in the surface can lead to loss of gloss. No or insufficient surface cleaning can lead to more material usage (primer, color or clear) to create a smooth finish. A clean, sanded surface allows paint droplets to spread evenly.”

Stick to the Program

As far as old habits go, Rubber Seal’s Jeff Prather sees the detrimental effects of those in the use of adhesion promoters on bumpers.

“Each paint system has guidelines for the proper use of their product, but painters tend to go back to the same old habits that Billy Bob taught them when they were kids,” says Prather. “And they’re still going to do it that way no matter what the manufacturer says. They could have the right product sitting on the shelf in their paint cabinet, but they will still do what they’ve always done. Then, a month or two down the road, the car comes back because paint is blowing off the bumpers.”