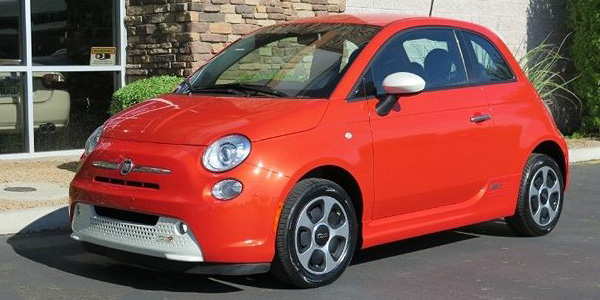 Consumers are snapping up used electric and plug-in hybrid vehicles faster than most gasoline-powered vehicles, according to a new study by iSeeCars.com.

Consumers are snapping up used electric and plug-in hybrid vehicles faster than most gasoline-powered vehicles, according to a new study by iSeeCars.com.

“Vehicles that move off dealer lots faster must have the right mix of demand and supply that may be driven by factors like price, unique features and performance,” said Phong Ly, iSeeCars.com CEO.

The fastest-selling car is the FIAT 500e, selling in 22.2 days. Although the compact electric car does not receive great reviews for its performance, its low prices might be just enough to entice buyers curious about making the switch away from gasoline.

“The average cost of one- to three-year-old cars is almost $21,000, so it seems consumers are willing to take a chance on a car at a price point that’s less than half the average,” suggested Ly.

The BMW i3 ranks second, at 23.2 days. The futuristic-looking hatchback is the lowest-priced luxury car on the list, with an average price of $23,603.

“The i3 was introduced as a 2014 model, so now that it’s three years old many leased cars are returning to market, driving down its price and possibly increasing demand for the car,” said Ly. The i3 averaged $38,285 last year, dropping 38.4 percent in price.

The other two buck the trend. Last year’s fastest-selling car, the Toyota Prius Plug-in Hybrid, ranks fourth at 24.7 days. It dropped a mere 1.1 percent in price to $18,594.

“Demand for the Prius Plug-In may have stayed strong due to demand from California – 73 percent of these cars were sold in that state,” Ly noted. “Plug-in Hybrids meet the requirements for California’s Green Clean Air Vehicle Decals, which allows drivers to use HOV lanes, and the distribution limit of these stickers was removed last year, possibly increasing the Prius Plug-in Hybrid’s popularity in that state.”

“Tesla’s popularity, along with the scarcity of the Model S on the used-car market, is probably driving prices up while cars continue to sell quickly,” Ly speculated.

Interestingly, both the Prius Plug-in Hybrid and the Model S take longer to sell this year compared to last year, up 26.2 percent and 8.2 percent respectively, suggesting that the lack of a price drop did have a small effect in driving down demand.

In contrast to the fastest-selling cars, the nation’s most popular cars all sell about as fast as the overall average, ranging from 26.8 days to 37 days. Interestingly, despite their popularity as segments, SUVs and trucks are largely slower to sell than average.

“With the exception of the Honda CR-V and Toyota RAV4, the more expensive SUVs and trucks all take more than 33 days to sell, compared to the cheaper sedans, again illustrating the effect of price on moving cars off of dealers’ lots,” Ly said.

None of the most popular cars had a year-over-year drop in price that was more than 9 percent, perhaps dampening demand for these cars compared to some of the fastest-selling models.

The Nation’s Most Popular Cars

Consumers’ worries about alternative-fuel vehicles’ range, battery life, safety and performance seem to be balanced by falling prices, leading to quick sales of these cars. Ly advised: “Prices for hybrids, plug-ins and electric vehicles are more affordable than ever, so shoppers who are ready to buy one should act fast because these cars are in great demand now.”

OEMs: Mercedes-Benz to Go All Electric by 2030