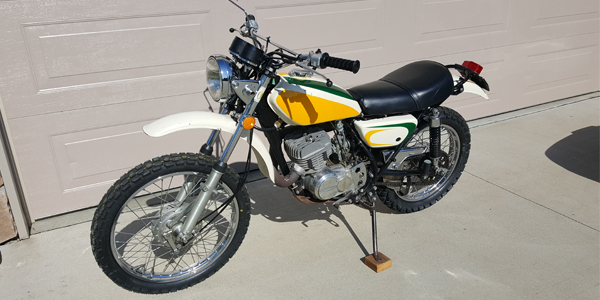 Last month, I talked about my first acrylic enamel complete on a ratty MGB. This month, I’ll tell you the story of my 1974 Suzuki TS-250 scrambler (a style currently called dual-sport) that was my first personal effort at a three-stage candy paint job.

Last month, I talked about my first acrylic enamel complete on a ratty MGB. This month, I’ll tell you the story of my 1974 Suzuki TS-250 scrambler (a style currently called dual-sport) that was my first personal effort at a three-stage candy paint job.

For one thing, the gas tank, fenders and side covers were much easier to prep than that battered British roadster. I bought the bike new off the showroom floor. It was mostly red with factory decals in blue and white. I rode it that way for a year and finally decided it would be cooler with another paint job.

We sold a line of custom finishes made by the Metalflake Corp. of Haverhill, Mass. The flakes were colored laminated or metalized film cut into a variety of sizes. It took lots and lots of clearcoat to cover the largest flakes and leave a smooth surface after polishing.

One early failure in Iowa’s cold winter was very dramatic. Our customer, who later became an employee, had painted his 1968 Camaro complete with an odd-looking greenish gold flake over a similar colored primer. It took many gallons of clear lacquer to fill the ravines between the flakes, but after numerous coats, color sanding and even more clearcoats, the car looked great.

One particularly cold winter morning (it gets to be minus 30 degrees there sometimes) several years later, it was parked in our lot by the back door. The last employee through the door said she heard a funny noise outside, so I went out, only to hear the sound of his thick lacquer finish breaking like shattered glass. Everyone came out and watched and listened as the cold weather caused the inflexible lacquer paint job to crack and crumble, panel by panel, as the freezing cold air shrunk the metal panels faster than the paint.

With the expensive custom paint job ruined and the mammoth task of stripping the finish (probably measured in inches, not mils) ahead of him, the owner elected to buzz it down with 80 grit and fill the cracks with polyester primer instead of removing the old finish. After many more coats of the thick MEK-peroxide catalyzed primer-surfacer, he painted it with acrylic enamel and sold the car. Now the new paint job was even thicker – the reason that professional used car buyers in those days always carried a magnet with them.

I was positive I didn’t want to paint my motorcycle with a metalflake job but elected to use translucent “candy apple” color over a silver metallic base – all lacquer, of course. After removing the decals, I sanded the parts down and sprayed a silver base color using my trusty DeVilbiss JGS-572 spray gun. Then, several passes of a bright green candy mid-coat, being careful to not overlap passes as each coat of any translucent color appears darker. Watch for that dark shadow at the point the C-pillars meet the quarters on a hobbyist-painted candy at your next car show. It’s easy to do because, when the color meets down the sail panel and across the quarter, there’s an extra, darker coat.

Once I had the parts all candy green over silver, it was too much color to suit me, so I taped off flames over the green candy and painted the remainder of the parts black. That was a look that made me happy, and I cleared them all with Ditzler’s DCA-468 clear lacquer.

In those early days, the paint manufacturers often had trouble keeping their clears clear. The main enemy of any paint finish is the ultraviolet rays of the sun, and adding UV screeners to clear resins often tinted the clears yellow. Ditzler (now PPG) had a really clear lacquer. This yellowing was a problem that extended to the OEM finishes too, as early clearcoated whites were tough to match because the factory clears had a yellow tint from the screeners. Thankfully, clears these days are both water-white clear and durable in the sunshine. After careful hand polishing, I had the coolest TS-250 dirt bike in town…until I filled it with gas on the first hot summer day.

It was literally the second tankful in my newly painted ride, and I was super careful not to spill any on my snazzy custom tank. Except I did, and the gasoline and the hot sun stained the tank immediately. It wouldn’t polish out, and by the time I sanded the stains off, I needed to repaint both the candy green flames and the black. I elected to ride it damaged that summer and was carefree when I crashed it in the dirt many times, an early rat bike look.

That winter, I sanded off all my hard work and repainted the tank, fenders and side covers white. I taped off some mod-looking “shapes” (it was the late 70s!) and, using the leftover candy green, added some translucent candy yellow shapes to create a three-tone white, green and yellow motorcycle. I was the coolest kid on my block. And much smarter this time, I cleared all the lacquer colors with DAU-75, Ditzler’s first catalyzed acrylic urethane enamel clear. It did have a yellow cast from the UV screeners but was really durable and could withstand a gasoline spill on a hot day…which I tested accidently later that summer. No problem!

I bought the motorcycle in 1974, painted it twice in the late 70s and still own it today. Last summer, I dug it out of the back of the garage, replaced the 40-year-old tires, scraped the gunk out of the tank and rebuilt the carburetor. It still makes that happy two-stroke “ning-ning” sound, and the painted parts all still have good gloss. The 70s mod color design always starts a conversation at any biker gathering. Over the years, I’ve painted many of my other motorcycles with some form of custom color scheme, but that first candy paint job is still in my garage and still looks good.