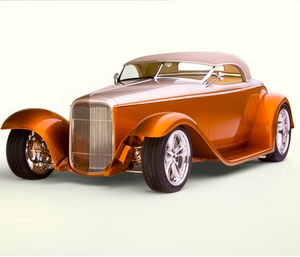 Known as the "Magnatude," the vehicle features a Butterscotch Pearl with Champagne Metallic coating from BASF’s Glasurit 90-Line and is a custom build of an old Foose design from 2001.

Jerry Magnuson, owner of Magnatude, bought a fendered Muroc Roadster from Kugel Komponents when they were first available, mostly using it as a test vehicle for his successful Magnacharger supercharger program. He made a few upgrades, such as hidden headlights in the front fenders and an engine blower with built-in inner-cooler. When it came time to finish the vehicle, Mangnuson contacted Foose Design.

At Foose, the vehicle had its body smoothed and aligned. The suspension components and rear end were reshaped, and Foose designed custom wheels and a two-tone paint scheme. Jim Griffin installed the Chip Foose designed interior and all new custom trim was added. Signature styling pieces including the pedals, interior door panels and gauges all featured Muroc badging.

The Magnatude was named the 2010 Goodguys Street Rod d’Elegance.