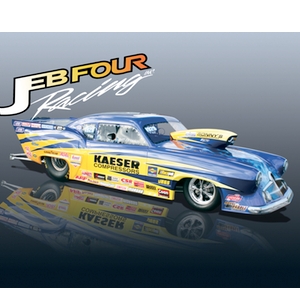 JEB Four introduced its original Henry J on the NHRA and IHRA circuits in 1993, and signed its first major sponsorship deal with Kaeser Compressors in 1995. Kaeser and JEB Four introduced the all-new custom Super Henry J at the Performance Racing Industry Show in 2006, and the vehicle has finished in the top 10 of NHRA’s Northeast Division (Top Sportsman class) every year since its debut. The Super Henry J’s sleek carbon fiber body and unique paint scheme have drawn a great deal of attention, but it’s what’s under the hood – including its 1650-hp, 706-cubic-inch engine – that has allowed the team to frequently qualify among the top in points.

In 2012, expert teamwork, a great car and a bit of luck resulted in a fantastic season. The team finished sixth in Division 1 – the sixth straight year they have been in the top 10. They also ran their fastest 1/8-mile and 1/4-mile times ever in 2012.

The SEMA Show includes, for the first time, a 6,000-sq.-ft. area dedicated to helping businesses understand how to customize and/or repair vehicles that have advanced driver-assistance systems (ADAS).