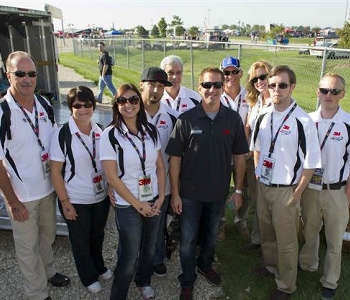 For Glenn Lirette, his love of NASCAR went into high gear on Sunday when he had a chance to see his racing heroes up close and personal at Chicagoland Speedway – thanks to the 3M Automotive Aftermarket “Your Ticket to the Track” Sweepstakes.

Lirette, shop manager for Trapp Cadillac Chevrolet in Houma, La., was joined by shop painter Kerry Cunningham, along with representatives from his local distributor, Sherwin-Williams. The group toured the garage and pit road, visited with the No. 16 3M Ford Fusion pit crew and met the No. 16 driver, Greg Biffle. They attended a Q&A session with Dale Earnhardt Jr. and Danica Patrick. Lirette also had the opportunity to attend the pre-race drivers’ meeting.

Lirette won the third of five grand prize experiences from the sweepstakes thanks to a specially marked package of 3M PPS paint preparation system cups and collars he purchased from Sherwin-Williams. He also won a 3M Racing cooler.

“I’ve been using 3M products for 30 years, but nothing like this has ever happened. I pulled the special ticket on the box and entered my code, and next thing I know they were calling to tell me I had won,” said Lirette.

Lirette has attended races at Daytona, Talladega and Darlington over the years, but has never been to Chicagoland Speedway or experienced a race from inside the garage like he and his guests did this weekend. His VIP prize package included roundtrip airfare and hotel accommodations, tickets to the race, VIP tour and a 3M Racing merchandise gift bag for him and his guests.

“This experience has been great,” he added. “What an amazing day and incredibly lucky turn of events. Thanks to 3M for making this all possible.”

The 3M “Your Ticket to the Track” Sweepstakes still has other prizes up for grabs. For more information and specific product part numbers that are eligible for the sweepstakes, see official rules at 3MCollision.com.