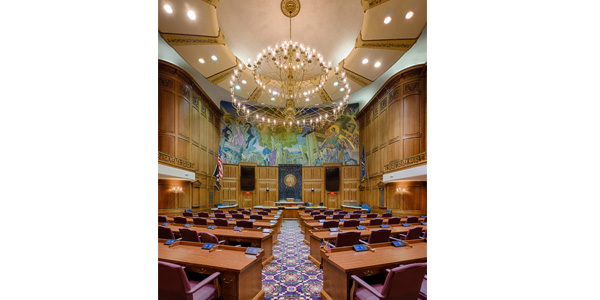 What started out as a bill containing “some good things” for body shops and consumers in the Hoosier State has become “a nightmare,” the president of the Indiana Auto Body Association (IABA) said.

The Indiana House of Representatives chamber

What started out as a bill containing “some good things” for body shops and consumers in the Hoosier State has become “a nightmare,” the president of the Indiana Auto Body Association (IABA) said.

When Senate Bill 164 sailed through the Indiana Senate, the association viewed the anti-steering bill as a step in the right direction for consumers and body shops, even if the bill wasn’t perfect. On Feb. 27, however, the Indiana House of Representatives passed an amended version of the bill, which now contains additional insurance-friendly language.

“Obviously the insurance lobby got ahold of it and turned it in a completely different direction,” IABA President Doug Martin of Martin’s Body Shop told BodyShop Business.

Under the amended version of the bill, it would be considered a “deceptive act” for a body shop to “accept the assignment of any rights” of a consumer. Below that, there’s new language stating that legal action to settle a claim dispute “must not be brought on behalf of a group or class of plaintiffs” – essentially prohibiting multiple body shops from filing class-action lawsuits against insurers on behalf of their customers.

The amended version also states that a repair is not defective if it conforms to the OEM repair specifications or “generally accepted industry standards.” In the view of the IABA, that’s “the most troublesome” aspect of the amended bill, Martin said.

SB 164 still would forbid insurance carriers from requiring policyholders to take their collision-damaged vehicles to a particular shop. The bill also would make it illegal for body shops to “coerce or intimidate” consumers to boycott an insurer’s drive-in claim facility, and would make it illegal for shops to “unreasonably deny” an insurer’s representative access to the shop to inspect or re-inspect a collision-damaged vehicle.

Because the Indiana General Assembly voted on two different versions of SB 164, the bill is back in the Senate for another possible vote. Sen. Mark Messmer, who introduced the original bill, has assured the Indiana Auto Body Association that the current amended version of the bill – which the association vehemently opposes – won’t see the light of day.

“He’s set up a conference committee to try to get the bill back to the version that passed the Senate,” Martin said. “And if that doesn’t work, he’s going to kill it.”