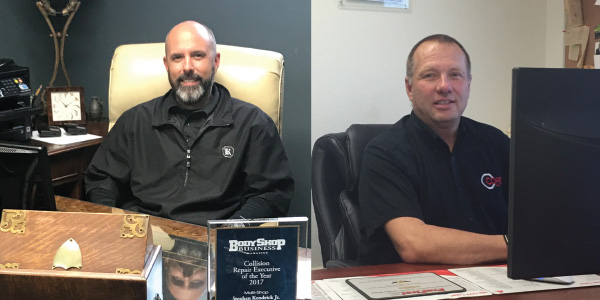 Being so vested in their family shops, Stephen Kendrick Jr. and Rick Cope are passionate leaders who put their people and principles first.

Since 1984, BodyShop Business has been presenting the Executive of the Year Awards to shops and individuals “who truly exemplify excellence in every portion of their business,” as BodyShop Business Publisher Scott Shriber explained during the Nov. 1 Collision Industry Red Carpet Awards Breakfast in Las Vegas.

“All of the applicants … show a true commitment to the industry, to their business and to their community,” Shriber said. “This year’s winners are absolutely no exception.”

Despite the distance between this year’s winners – Rick Cope is an Idaho single-shop owner with 10 employees; Stephen Kendrick Jr. is a Georgia MSO with 175 – Cope and Kendrick have common threads that run deep.

Cope, owner of Cope Collision Center in Meridian, Idaho, and Kendrick, owner of Kendrick Paint & Body in Augusta, Ga., are following in the footsteps of their fathers (and grandfather, in Kendrick’s case). Cope’s father started Cope Auto Repair (now Cope Collision Center) in 1963; Kendrick’s grandfather opened Kendrick Paint & Body in 1952. Both owners have been immersed in their family businesses since their high school days.

“The collision industry is in my blood,” Kendrick Jr. says. “I’ve been around it all my life.” 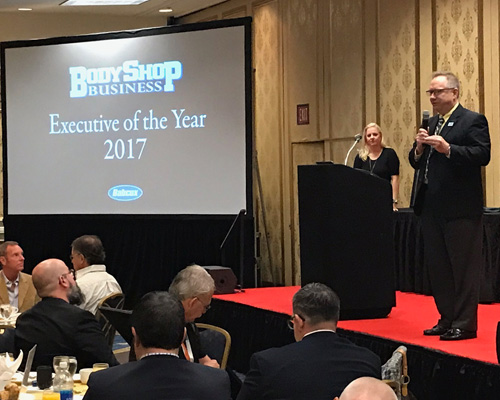 Being so vested in their family shops, Kendrick and Cope are passionate leaders who put their people and principles first. They lead by empowering their employees; standing up for what’s right; being a force for good in their communities; and embracing the challenges and opportunities of a fast-changing industry.

In separate conversations with BodyShop Business, Cope and Kendrick both conveyed their steadfast commitment to proper, professional repairs and emphasized the importance of adhering to OEM repair specifications – regardless of what their insurance partners might say.

“Our concern is safety and quality, and for [some insurers] it’s more about the bottom line,” Cope says. “Honestly, I really don’t care what the bottom line is. It could be $10. As long as the car’s fixed properly.”

Like many repairers, Cope grew up working in his father’s shop. In the early 1980s, when his father decided to build his own shop rather than continue leasing, Cope helped lay the bricks for the facility, where the shop still operates today.

In college, Cope flirted with the idea of becoming an accountant. But he decided against it, instead earning a technical degree from Boise State University’s auto body program.

“I couldn’t see myself sitting behind a desk all the time,” Cope recalls. “I kind of like working with my hands. And I kind of looked at it as a good opportunity to take over for my dad and have my own business someday.”

In 1998, Cope and his father became business partners, and Cope took over the daily operations. A few years later, his father retired and Cope became the sole owner.

Cope played some basketball in college, and you might say that he runs his shop like a wise coach runs a team: by focusing on the fundamentals. Indeed, Cope has built the shop’s success on a rock-solid foundation of training, education and certification. The I-CAR Gold Class shop has certifications through Assured Performance, Automotive Service Excellence (ASE) and Honda.

“We are factory-certified because we follow the manufacturers’ strict guidelines for repair – in the training our technicians receive and the equipment and systems we use to return your car to pre-loss, factory condition,” the Cope Collision Center website explains.

Cope points out that the shop was the first in the area to become certified to repair the Ford F-150 when Ford shifted to an aluminum body.

“There were some other shops in our area that decided not to do that, and I felt that I wanted to be on the cutting edge and learning first rather than playing catch-up to everybody else,” Cope says. 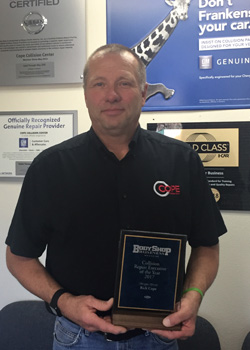 Cope’s passion for education and training extends beyond the walls of his 10,000-square-foot shop. He is a member of the advisory council for the College of Western Idaho Auto Body Technology program, a member of the advisory board for the Dennis Technical Education Center (part of the Boise School District) and chairman of the Idaho I-CAR Scheduling Committee. In his role with I-CAR, Cope helps local shops – including his own – stay on top of the latest OEM repair procedures.

While Cope’s involvement with local auto body programs has helped his shop find several technicians, that’s not his primary motivation for participating.

“I just want to give something back to the industry,” Cope says.

Cope believes that training will be critical to the future of the collision repair industry. Even during the Great Recession – when other shops pulled back on their I-CAR Gold training to cut costs – Cope insisted that his shop stick with it. Perhaps that’s why the rise of advanced driver-assistance systems doesn’t faze him in the slightest.

“To be honest, I’m really excited about what’s going on in the collision industry with all the new technologies that are going into these cars,” Cope says. “For a while there, before this new technology, it seemed kind of ho-hum. It was kind of boring, actually.”

Like any shop owner, Cope wants to grow the business. For Cope, that likely would mean adding on to his current location or finding a larger facility nearby. But he won’t grow at the expense of his principles.

“I’m a believer that bigger isn’t always better,” Cope says. “Our main priority is that the car is fixed right and that the customers are happy with the repair.”

Kendrick Paint & Body has come a long way since 1952, when the shop opened in downtown Augusta with one stall for repairs. Today, the MSO has eight facilities in Georgia and South Carolina, including four shops in Augusta.

Stephen Kendrick Jr. started working at his grandfather’s shop when he was in high school. After he graduated, he worked there on a full-time basis – “sweeping floors, washing cars, getting in everybody’s way and just working my way to where I’m at today.”

Kendrick bought the shop from his father and uncle in 2008. While the business has grown with Kendrick at the helm, he’s quick to divert the spotlight to his employees.

“What’s most important, I think, is making sure you hire the right people who are smarter than you to do the tasks that are needed to run the operation,” Kendrick says. “[You need] somebody who’s honest, somebody who has the same vision as you do – not just for themselves but for the entire company – because you can’t do it by yourself. It’s really important to have the right mix of people around you.” 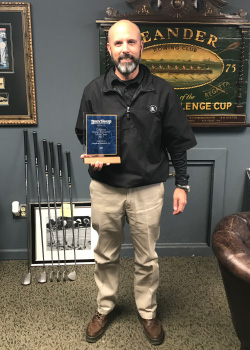 Kendrick doesn’t like to micromanage. He’d rather look at the key performance indicators – to see where the business can improve – and “let the managers manage their shops and the general manager manage the managers.”

That doesn’t mean he’s removed from the business. Even with eight stores and 175 workers, Kendrick makes a point to maintain a small-business feel: He knows all of his employees by name, and tries to get to know each of them. He also takes pride in his open-door policy for employees’ questions, concerns or suggestions.

“I want them to feel like they belong to something – not just some corporation,” Kendrick says. “ … I think creating that positive atmosphere, taking their questions and suggestions seriously and just having that family feel keeps them motivated and looking forward to the next day.”

Kendrick feels a strong pull to give back to his community. In addition to being an active member of several local chambers of commerce, Kendrick Paint & Body supports a number of local charity organizations and has helped refurbish vehicles for deserving families as part of the Recycled Rides program.

For Kendrick, being a force for good in the community starts on the shop floor. Kendrick holds his managers, technicians and estimators to high standards, knowing that customers have placed their trust in the business to repair their vehicles properly and safely. It’s a responsibility that Kendrick takes very seriously.

Kendrick and his managers emphasize the importance of researching and following the OEM repair guidelines, and the MSO has established quality-control checkpoints throughout the repair process. Kendrick notes that ensuring a safe, proper repair is a team effort.

Kendrick Paint & Body is a DRP shop, and Kendrick acknowledges that those insurer relationships can be stressful at times. But when it comes to a proper repair, he insists that his shops won’t compromise.

“We’ve taken a stand that we’re going to fix these cars properly,” Kendrick says. “If we can’t fix them properly, or we’re being instructed not to repair them properly, we don’t want to work on them.”