Caring about customers and employees pays off! 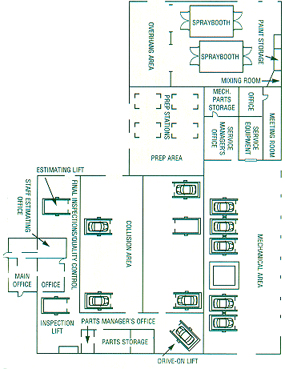 Caring about customers and his employees has landed
Danny Kingston the largest body shop operation in New Orleans
– and, possibly, in the whole state of Louisiana.

Kingston, along with partner Ronnie Lamarque, owns
Champ’s Collision Centers, which consists of six locations strategically
located on both sides of the Mississippi River and Lake Pontchartrain.
This captive customer base seems to be a result of Kingston’s
business philosophy, the stock he places in people and the strategic
planning of the locations.

It was actually Kingston’s business sense that drew
him to the collision repair industry. While in high school, he
worked a summer job sanding and painting cars. A few years later,
during Kingston’s senior year in college, he and lifelong friend
Chris Antonatos started Champ’s because Kingston says he noticed
that people operating body shops weren’t managing them as businesses.

A year after starting Champ’s, Kingston – who was
still in college and starting a family – Kingston went to work
for Lamarque Ford, where he managed its body shop for 15 years.
During that time, Champ’s continued to grow, and Antonatos found
himself in need of an office staff and financial expertise to
move forward. Kingston and Lamarque provided that expertise by
buying Champ’s.

That was five years ago.

Now – five additional locations and seven insurance
companies later – Antonatos concentrates on running the original
location while assisting with the others, and Kingston and Lamarque
take care of the financial and organizational needs of the business.
In particular, Kingston works to keep the company stable and ready
for the future, works with his managers to ensure they have the
necessary tools and capital needed to stay on top of the industry
and tries to keep overhead as low as possible – but not to the
point of affecting quality. This philosophy is what Kingston thinks
sets Champ’s apart from other autobody enterprises.

Quality, as always, keeps customers coming back.
As a matter of fact, quality work and word of mouth is Champ’s
main form of advertising, with the help of some billboards and
an ad in the Yellow Pages.

And not only does quality keep customers coming back,
but it helps keep technicians coming back, too. "Our [technicians]
know we’re going to fix the car correctly, or we’re just not going
to fix it," says Kingston, adding that this is what his techs
like the most about the company; they have confidence in the company’s
commitment and in its professional office staff to get the proper
amount of money to fix cars correctly and to pay them for their
work – allowing them to concentrate on the jobs at hand.

"It’s a lot easier if you know when you come
to work that you’re going to do everything the right way and you’re
not going to cut corners," says Kingston. "A good technician
will want to work for a company that he knows is going to stand
up for the right [way to fix automobiles.]"

This, Kingston says, is one reason Champ’s is able
to attract and keep good people – which are the backbone of this
successful business. In fact, about 90 percent of the good technicians
the business has lost have come back to work for Champ’s, "so
we’re really blessed with probably the best technicians in New
Orleans," says Kingston, adding that having six locations
also helps to attract and retain techs because it gives them options:
to work at a shop that’s close to home or to transfer to one of
Champ’s other locations.

Being able to run six shops is the result, Kingston
says, of growing good people. How does he find these good people?
According to Kingston, his greatest success has come from starting
with honest, hard-working people, trying to move them along and
allowing them to better themselves.

Kingston prefers to promote within his business,
rather than recruit people from other body shops with different
philosophies. As a matter of fact, most of his shop managers came
to Champ’s as appraisers. "Body techs and painters generally
find us," he says. "Good people attract good people."

All Champ’s technicians are I-CAR trained, and the
shop is part of the DuPont Assurance Of Quality (AOQ) program
and is an ASA member. Also, Kingston encourages International
Autobody Congress and Exhibition (NACE) attendance (mandatory
when in New Orleans) and has adopted in-house training.

In addition to giving "older" technicians
various financial incentives or perks for working with younger
technicians to teach them the trade, Kingston has arranged for
a "seasoned tech," a shop foreman, to go from store
to store to make sure technicians are up to date, ensuring they
know what’s expected of them and helping them strengthen any skills
they’re lacking. "I feel this will help them tremendously,"
says Kingston. "Hopefully, within a year, he will have made
it to all the shops."

Another type of testing Kingston has implemented
– which, when you get right down to it, shows that he cares about
his business and his employees – is drug testing.

Feeling there was a need to protect his good employees
and his business from drugs, Kingston recently decided to test
his employees. "Now that it’s over with," he says about
Champ’s first try at drug testing, "I think some of the guys
are very glad we had the program because now they’re ensured that
they’re working side by side with people who are drug free. …
Their families are going to be the big winners."

And to ensure newcomers will also be drug free, Kingston
plans to drug test before hiring. "From an insurance standpoint,
it makes very good sense. … [It could be] a dangerous situation
if you don’t have all your faculties when you work on cars,"
he says. "[And you have to take into consideration the] quality
of repairs. It just seemed to make sense; drugs lead to theft
and a lot of other things we just can’t tolerate."

Another way Kingston upholds quality is by acquiring
quality equipment. Champ’s has made large investments to ensure
cars go through the repair process quickly. About two years ago,
$300,000 was spent for one location’s paint department to ensure
it could handle the desired volume.

Concerned about the timeliness of repairs, the owners
have outfitted Champ’s with Spraybake paint booths at all the
locations – most of the locations having two booths. "It’s
really helped us set up to go forward," Kingston says. "We’re
in a position now where we can get cars in and out fairly quickly."

A Flood of Work

The Big Easy, separated by various bodies of water,
gets a lot of rain, which can be a recipe for disaster: disaster
in the form of floods.

The last flood, which occurred in May ’95, almost
ruined Champ’s. Kingston had several insurance companies asking
him to take on 600 to 700 cars. The problem: In addition to not
being equipped for that kind of volume, Kingston says his employees
were overworked. To keep up with the volume, says Kingston, Champ’s
employees worked through every night for a month; but, by the
time employees were compensated and dinner was bought for all
those working, not much money was really made. His shops might
have made $5,000.

Looking back, Kingston says he would’ve rather paid
someone else $20,000 to do the work – just so his employees could
have gone home to be with their families. "It’s something
we did and will continue to do because it helps the community,"
says Kingston. "If we weren’t to attend to those needs, I
don’t think we would’ve been a very good business."

On the positive side of things, when it isn’t causing
floods, rain can be good for business. "If there hasn’t been
rain for a couple of weeks, I think people forget how to drive
[in it]," Kingston says with a laugh. And, though business
doesn’t usually fluctuate very much throughout the year, Kingston
remembers two or three times New Orleans was showered with ice,
which "pumped up business because no one knew how to act
in it."

Another event special to New Orleans is, of course,
that big party in the streets known as Mardi Gras.

But does it affect business as usual?

Sort of, but not by bringing in increased business
due to drunken mishaps; it only ends up postponing some repairs
because many people hold off until after the celebration if their
vehicle is still driveable. "There’s a lot of excitement
in the city," Kingston says. "For about a two-week period,
everybody’s interested in Mardi Gras and not interested in taking
care of their vehicle needs. … But it’s tradition, you know,
so everybody kind of tolerates it."

Though Mardi Gras brings in a lot of out-of-towners,
Kingston says only a few of them visit the shop after a car theft
or collision.

Kingston says he doesn’t remember any one particularly
interesting Mardi Gras repair … "Nothing really stands
out," he says. "But with all the wild stuff – people
getting killed, people going crazy – but nothing that really stands
out."

Kingston does, however, remember one "crazy"
repair, which wasn’t, believe it or not, a result of Mardi Gras:
A man rented a car – and then went crazy. According to Kingston,
the man thought the car was a bull and "rode" it. The
man – or shall we say, the "bull rider" – bent the car’s
windshield wipers forward (perhaps to imitate bull horns?), placed
napkins on the vehicle’s carpets and then packed the car with
mud. With no other options, police resorted to drastic measures,
shooting at the rodeo action taking place up and down a levee.

When the car finally arrived at Champ’s, techs had
to remove the mud and repair the bullet holes. The total repair
bill: $6,000.

"This guy was just nuts," says Kingston
after sharing his story. "But anyway, nothing that really
stands out."

BSB: Do you job cost?

DK: "Yes, but I don’t
really care for it. I prefer to do it on a month-end basis because
when you job cost per job, I think you’re looking at the profitability
of each and every job, and I think, at times, that will make you
do one job differently than another. … We use our month-end
financial statements to judge what each shop is doing."

BSB: What were last year’s
sales?

BSB: What do you do with
profits? Do you reinvest in the business, or do you invest in
stocks?

DK: "Reinvest, naturally,
a large part of it back into the business: probably a third of
it back into the business, a third of it into reducing our debt
each and every year – five years from now we’d like to be debt
free – and, naturally, the other third, or maybe a little more,
has to go to Uncle Sam so we can take care of everybody. And we
have retirement plans for our employees, so we hope to put some
into that."

BSB: Do you get financial
advice, and if so, where do you get it from?

DK: "Yes, I do. We
have a CPA who comes in once a month, and we sit down and go over
all the financials. Then we sit down with our people, and everybody
has a little say."

BSB: If you could give
other shops a business tip, what would it be?

DK: "Invest in your
people. Employees are as committed as the employer, and if the
employer is committed, then it’s very easy to get good employees
over time."