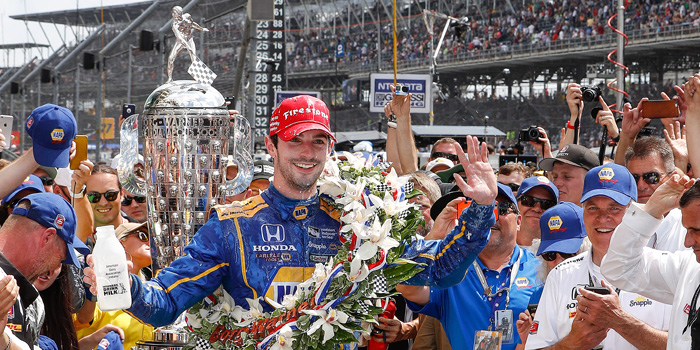 According to team owner Michael Andretti, now having won the 500 four times as an owner, “To come home 1-2 was amazing. I don’t know what to say – it’s a great day, to be a part of history, to win the 100th running, and to win it with a 1-2 finish is just incredible.”

Sherwin-Williams serves as the Official Paint and Finishing Partner of INDYCAR, the Verizon IndyCar Series, Indianapolis Motor Speedway, Indianapolis 500 Mile Race, and the NASCAR Sprint Cup Series Crown Royal presents the “Your Hero’s Name Here” 400 at the Brickyard Event at the Brickyard as part of a multi-year partnership agreement.

“Several IndyCar Series teams and over a dozen NASCAR teams currently use Sherwin-Williams Automotive Finishes, where we are also the Official Automotive Paint of NASCAR,” said Nichols. “But regardless of the racing series, we aim to help all teams cross the finish line and ensure that their cars and their sponsors always look good circling the track.”

For more information about Sherwin-Williams products or its motorsports program, visit www.sherwin-automotive.com or call 1-800-SWULTRA (1-800-798-5872).

Advertisement
In this article:Indianapolis 500, nascar, sherwin-williams