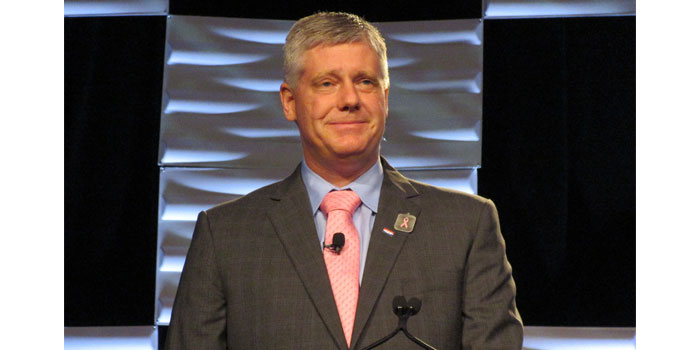 After thanking the crowd for being there and also thanking PPG, the sponsor of the event and also the sponsor of Wednesday night’s AMI Celebration of Excellence, Risley talked about hosting the show in Detroit for the first time last year.

“When we came here last year, it was our first time in Detroit,” Risley said. “We had a new show management company, a new date and a new city. We had no idea what to expect. The feedback we got from potential exhibitors and attendees was mixed, but I am very proud to report that the show was an overwhelming success last year, thanks in large part to all of you.”

“For me, to be able to share that is extremely comforting,” said Risley. “For me, NACE | CARS is back in its rightful place in the industry. It is still the only and largest national show solely dedicated to collision repair and service repair professionals. Probably more specific than that, we represent the leaders in the industry. Industry leaders come to this show.”

Risley talked about how he grew up in the industry, with his parents owning a collision shop. He recalled his dad talking about a “mythical” place called NACE back in the event’s heyday in the 1980s, and how, when his dad went to the show, it was the first time he had ever seen him wear a sport coat. Risley also recalled his own personal first visit to NACE and bumping into collision “legends” he had read about in the trade press.

“Why do I share that with you today? Because there have been a lot of changes with NACE | CARS,” said Risley. “If you were here last year or even the previous year, this show has done a significant turnaround and change, especially in terms of what it has to offer. Hopefully some of you have been able to take in some of the training classes and some of the content we’ve put together, more specifically the business management leadership training that is available to all of you.

“The people here today in this hall and the people on the show floor do represent the industry leaders, and for that I’m extremely proud. Typically the people who come to these events share something that I have deep in my heart, and that is a passion for the industry. It has provided me with everything I could possibly want in life, and has enabled me to provide some of those things to my family and my children.

“I am very thankful again to be here to speak before everybody, I hope you have a terrific week, and I hope that all of you have the same experience I had some 30 years ago during my first NACE and the dynamic impact it had on my life.”

To read more on this year’s NACE | CARS Expo in Detroit, click here.