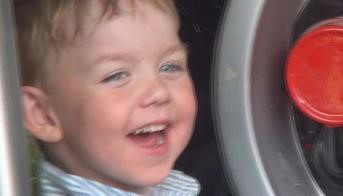 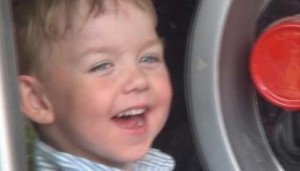 Dean Koelzer, owner of CARSTAR Walt’s Auto Body in Topeka, Kan., recently teamed up with Make-A-Wish to make a young boy’s dream come true, in his very own backyard.

Through Make-A-Wish Kansas, Koelzer learned about four-year-old Daniel, the youngest of Jeanette and Joe Wood’s six biological and five adopted children. He’s full of energy, loves being outside and lives with Duchenne muscular dystrophy. The degenerative condition will likely shorten his life to his 20s.

The family says Danny blossoms most when he’s around trains. He’s already visited more than 30 states, counting trains as they move along the highways. At home, toy train cars and tracks are never far from reach.

When Make-A-Wish came up with the idea to give Danny his very own train in his backyard, Koelzer was all aboard to help.

Dr. April Abernethy, president and CEO of Make-A-Wish Kansas, says the process actively began in January. Through contacts she has made over the years, she found a man named Paul Neudecker who runs an Ill.-based company called Premier Works. He was selling a mini train and donated a large percentage of the cost to the project, even delivering it to Topeka at no charge.

However, time had taken its toll on the train, and it needed a lot of work. Make-A-Wish approached Lance Smith, whose son previously had a wish granted, to talk to his boss at CARSTAR Walt’s Auto Body for an unusual restoration challenge.

Koelzer got his first look at the locomotive and wondered what they had gotten themselves into. Still, he was willing to let his crew give it their best shot.

“It’s a way for us to give back to the community,” Koelzer said. “This community has been really good to us, and there’s not a better organization than Make-A-Wish.” 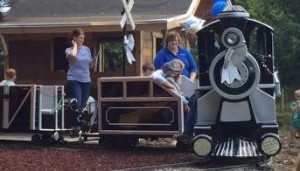 With the centerpiece on track, Davis Electric wiring the electrical work and Trusted Choice Insurance donating money to help buy replacement pieces, Make-A-Wish and Danny’s family led an army of volunteers – including real Army soldiers from Fort Riley and KU’s Chi Omega-Lambda chapter – to lay the tracks, add a play area complete with fort, sand box and trampoline, and even build a depot. Lowe’s and International Mulch helped offset some of those costs.

“We’ve had 15 businesses, clubs and associations involved with this, hundreds and hundreds of volunteer hours,” Abernethy said.

Danny, recovering from a recent hospital stay, had no idea what was happening in the backyard until a recent Saturday, when his parents walked him outside for a surprise. There stood a crowd of roughly 50 people, sounding whistles and singing, parting the way to reveal his very own train.

While the noise of the crowd was initially overwhelming, it took just one lap for Danny to enthusiastically nod yes when asked if he wanted to take another lap.

“It is an amazing opportunity to see the family come together with the community that they’re a part of and see the magic that a wish can bring,” Abernethy said.

It was a moment that made the past six months come full circle for all involved. Lance Smith and his son climbed aboard for a lap with Danny, and Ash Davis of Davis Electric proudly pushed the button to send the train on its inaugural run.

“The smile on Daniel’s face was priceless,” Koelzer said. “It made all this worth it – all the hard work they put into this, to see the smile on that little boy’s face was truly amazing.”