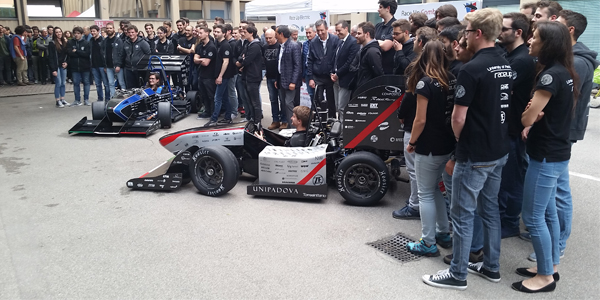 CEBORA S.p.A, an Italian developer of new welding technology and manufacturer of leading range of automotive welders, announced it is lending its support to the Scuderia Tor Vergata of the University of Rome and the Race Up Team of the University of Padua in the 2017 Formula SAE season. Both university teams have presented their new competition cars (combustion and electric) to compete in the Formula SAE 2017 season.

Formula SAE (also known as Formula Student) is a car competition reserved for universities around the world, and is organized by the Society of Automotive Engineers (SAE). Formula SAE is meant to involve university students in the development and implementation of new automotive technologies. Students of different disciplines are involved and will compete in this new season on circuits around the world. Not satisfied with four wheel competition, Cebora S.p.A. is also sponsoring the University of Bologna in its development of an electric-powered racing bike.

Advertisement
In this article:cebotech, Welding