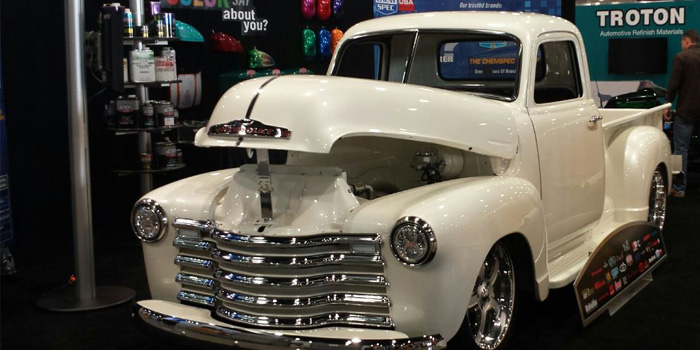 Paint company announced the completed acquisition by Axalta Coating Systems and had lots of foot traffic in its booth due to two featured display vehicles.

A 1949 Chevrolet Truck painted in a Pearl White tri-coat.

ChemSpec USA announced that SEMA 2015 was a great success for the company, primarily due to the announcement of the completed acquisition by Axalta Coating Systems and the high foot traffic of attendees viewing the two featured display vehicles, as well as custom painted parts on display by various artists.

The headline announcement concerned the acquisition of the company by Axalta.

“The team at ChemSpec USA is very excited about the opportunities that the acquisition by Axalta will present to our customers, employees and external partnerships,” said Ron Snow, president of ChemSpec USA. “It will allow ChemSpec USA, as well as its current and future customers, huge growth opportunities by having the financial backing and automotive refinish experience Axalta will bring to our organization.”

The first is a 1949 Chevrolet Truck painted in a Pearl White tri-coat. The truck was built at Tre 5 Customs and is the personal vehicle for Jeremy Rice, who owns the company. The paint was meticulously applied by Frank Rechlin of Ikandy Paintworks, after his talented team of body men smoothed the entire vehicle. The buildup of this classic truck took approximately six months and debuted at SEMA 2015.

The second was a 2001 Harley Davidson Electraglide Classic, built by Jason and Duley Duhon of Precious Metal in Las Vegas and painted by Lee Pickering of LP Designs. The bike started out as a 2001 HD Electraglide Classic (FLHTCU) 88ci and was taken down to the frame. The entire build was completed in less than 90 days. The Metalux 9228 Brilliant Silver base and the 1056 Stabilizing Clear with organic green toner was used to create the candy. A 9302 Super Black with 9700 Clearcoat was used for the black highlights and color, and all were designed, supplied and created by Lesa’s Auto Body Supply in Las Vegas.