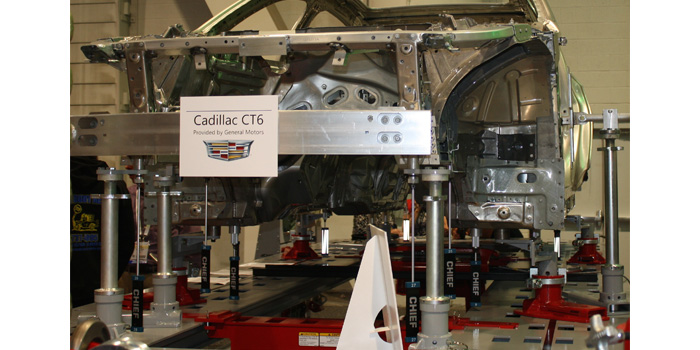 The Chief CT6 holding system is available through the GM Dealer Equipment program and includes more than 50 components from Chief’s Structural Holding Package, plus new CT6-specific fixtures for anchoring the vehicle at its suspension points.

Chief announced that GM has approved Chief’s new structural holding kit for anchoring the 2016 Cadillac CT6 to a frame rack for sectioning. The Chief CT6 holding system (P/N CK300003) is available through the GM Dealer Equipment program and includes more than 50 components from Chief’s Structural Holding Package, plus new CT6-specific fixtures for anchoring the vehicle at its suspension points. This prevents the vehicle from shifting during the panel removal or installation processes.

All facilities repairing collision damage on the CT6 are required by GM to use an approved holding system with an approved frame rack. Structural repair parts for the vehicle will only be sold to certified shops that have purchased approved equipment and attended proper training.

“The new Cadillac CT6 features an advanced lightweight structure that relies heavily on aluminum and high-strength steels,” said Richard Perry, OEM and strategic account manager for Chief. “Like all modern vehicles, the CT6 must be anchored securely when sectioning out damaged panels; however, it is designed without the traditional pinchwelds that technicians typically use to create anchoring points. Chief engineers came up with a solution that turns the vehicle’s front and rear suspension mounts into holding points that prevent it from moving out of place during the repair.”

Using short and long tubes, turnbuckles and locking wing nut assemblies from Chief’s Structural Holding Package, along with brackets from the new CT6 holding system, the technician can build a secure connection from the frame rack to the vehicle. Up to eight anchors can be created using the vehicle’s strut towers and other suspension connection points. A CT6 with its suspension components removed can be anchored using its side pillars and rails.

All components included in the CT6 holding system come neatly arranged on a rolling cart for convenience. Its base plates are compatible with the rectangular tie-downs found on most Chief frame racks, so Chief customers will not need to modify their existing equipment. Shops with racks from other manufacturers can easily adapt the CT6 holding system for their runways using Chief’s Universal Structural Holding Clamp System.

“Chief has the largest install base of repair systems in North America,” said Perry. “Pairing the CT6 holding system with the approved Chief equipment you already own is an easy way to qualify for CT6 certification.”

The Chief CT6 holding system was introduced at the SEMA Show 2015. To learn more about it and Chief’s other Structural Holding Package components, contact your local Chief distributor, call (800) 445-9262 or visit Chief’s website.