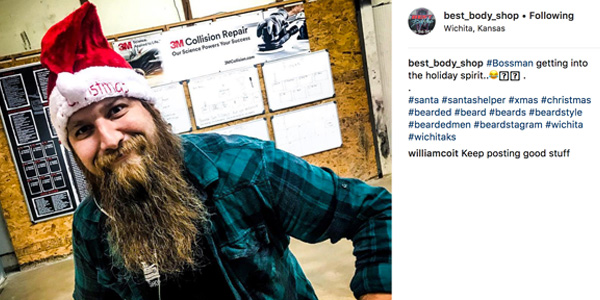 Before he opened Best Body Shop in Wichita, Kan., Clay Hoberecht didn’t have a Facebook account, admitting that he “hated that stuff.” But as he read books and watched videos about running a successful business, he concluded that having a social media presence wasn’t optional.

Clay Hoberecht got into the auto body profession because he loves working on cars. So when he started hearing that every business should have a social media strategy, it was a bitter pill to swallow.

Before he opened Best Body Shop in Wichita, Kan., Hoberecht didn’t have a Facebook account, admitting that he “hated that stuff.” But as he read books and watched videos about running a successful business, he concluded that having a social media presence wasn’t optional.

Today, Best Body Shop is rocking social media – to the tune of more than 10,000 followers and more than 200 five-star reviews on the shop’s Facebook page. (For the uninitiated, having a “follower” means your posts will show up in each follower’s news feed.) The shop also has 6,373 followers on Instagram.

Hoberecht opened the shop about three years ago. As any body shop owner can attest, starting your own business is an around-the-clock job, especially in the beginning. So when Hoberecht first started posting content on social media, it was strictly in his spare time – often when he was in his private office, for lack of a better term.

Things picked up steam when he met Chris Williams, a local freelance videographer/photographer. Hoberecht had his hands full running the shop, so he hired Williams to take pictures and shoot video for the shop’s social media pages on a part-time basis.

“When you’re painting, you’re doing body work, you’re trying to hire, you’re cleaning up after employees’ BS because you don’t know how to hire yet, you’re reading, you’re doing everything you possibly can just to keep the place running, the [social media] content seems to fall behind,” Hoberecht said. “That’s the No. 1 excuse – ‘I don’t have time for Facebook.’ Well, you don’t not have time for it.”

“Every single day, I make him a ‘hit list’ of what I want him to capture [for social media],” Hoberecht explained. “And then the rest of the day is 100-percent up to him, because I trust him.”

If you look at Best Body Shop’s social media pages, it’s clear that Hoberecht’s strategy is to maintain a daily presence. But there’s more to it than that. Borrowing from Gary Vaynerchuk’s book, “Jab, Jab, Jab, Right Hook: How to Tell Your Story in a Social World,” Hoberecht follows a sort of 80/20 rule for posting content.

Around 80 percent of the shop’s posts are “jabs” – such as a safe-driving tip or a holiday greeting – that don’t include a sales pitch. Here’s an example:

The other 20 percent of the posts are “right hooks.” These posts include a sales pitch or a call to action. For example:

“If you go through our Facebook page, you can consistently see the jab, jab, jab, jab, jab and then the right hook,” Hoberecht explained. “Eighty percent of what you do should be free, and 20 percent should be monetized.”

Hoberecht also leverages Facebook’s “boosting” feature, which pushes a selected post to a larger audience (for a small fee). He got big results from an Oct. 6 video in which he talks about an insurer’s insistence on using aftermarket parts to repair a 2016 vehicle. Hoberecht said he spent $20 to boost the post, and the post has generated 69,000 views, 652 likes, 252 shares and 296 comments.

When Hoberecht started posting content several years ago, his focus was quantity over quality. As his social media following has grown, and his strategy has evolved, he is far more deliberate in what he puts out there.

“With every single post, we pay attention to what people like and what they don’t, and we react off of it.”