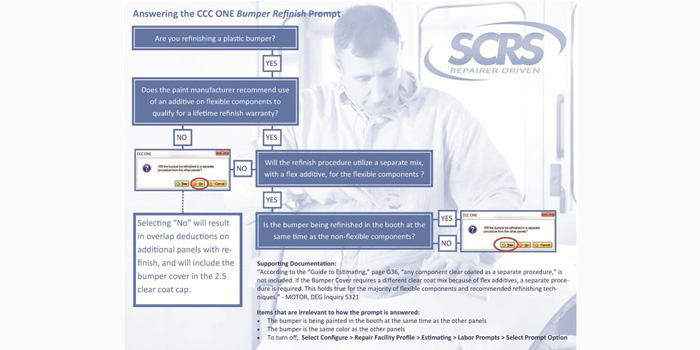 According to SCRS, the prompt is repeatedly answered inaccurately on insurance appraisals as “No” in the estimating systems, resulting in a lesser estimate value.

The Society of Collision Repair Specialist (SCRS) has launched an instructional PDF to aid in “Answering the CCC ONE Bumper Refinish Prompt.” The decision tree has been developed as a result of frequent and widespread reports of misrepresentation of the refinish process when responding to the system-generated question.

The CCC One product includes a prompt in their estimating system that asks, “Will the bumper be refinished in a separate procedure from the other panels?” If the end user replies “No,” the system will apply overlap deduction on the next refinished panel and will include the bumper cover in the 2.5 clearcoat cap. If the end user replies “Yes,” the system will identify the next refinished panel as the first major panel, without overlap deduction, and the bumper cover refinish labor will not be included in the 2.5 clearcoat cap.

If a flex additive is being utilized on plastic/flexible components and a separate clearcoat mix is being produced (as recommended by most automotive refinish manufacturers), the appropriate response should be “Yes.”

According to SCRS, the prompt is repeatedly answered inaccurately on insurance appraisals as “No,” resulting in a lesser estimate value.

Conditions such as the color of the bumper or if the bumper is in the paint booth at the same time as the rest of the vehicle have no bearing on the appropriate response to the prompt, says SCRS.

To know if the end user selected “No” as a response, the system will identify the line item with a symbol. The symbol (<>) indicates the refinish operation will not be performed as a separate procedure from the other panels in the estimate. It will appear on the estimate as follows:

SCRS states that it provided this information in hopes that a clearly defined decision-making process will alleviate confusion and misuse of a mechanism in the estimating system that has created a great deal of debate in the industry.

Further, SCRS states the estimating databases are all intended to be used as a guide only, and that the auto body professional performing the repair is in the best position to thoroughly inspect, diagnose, and identify the methodology and their unique cost of the vehicle damage repair.

Advertisement
In this article:ccc, SCRS