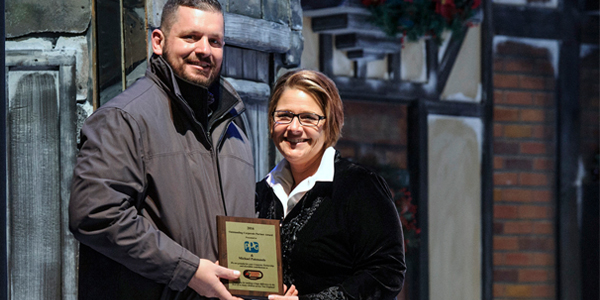 PPG has supported Speedway Children’s Charities in New Hampshire since 2009 with the organization’s Track Walk and Red Bucket Brigade collections.

The New Hampshire chapter of Speedway Children’s Charities (SCC) honored PPG by naming it the organization’s Sponsor of the Year for 2016. The announcement was made by chapter director Cheryl LaPrade at SCC’s annual grant distribution ceremony held on Dec. 8th at the Palace Theatre in Manchester, N.H. Michael Patenaude, PPG regional sales manager, accepted the honor on behalf of PPG. It was the second time in three years that PPG has been recognized as Sponsor of the Year.

“It’s an honor and a pleasure for us to recognize PPG’s exceptional support,” said LaPrade. “Without question, PPG is our top sponsor. Since PPG started working with us, the company’s support has been consistent and critical to our success in helping children in need across New England. We are sincerely grateful to PPG and look forward to a continued and positive relationship.”

SCC is a national organization based in Charlotte, N.C. It provides funding for hundreds of nonprofit organizations throughout the U.S. that meet the direct educational, medical, social and financial needs of children. SCC supports more than 400 organizations with generous grants provided through its eight regional chapters across the nation. Each chapter determines the needs of its surrounding communities and helps fund local organizations.

PPG has supported SCC in New Hampshire since 2009 with the organization’s Track Walk and Red Bucket Brigade collections. PPG is the sole sponsor of the Track Walk, an annual fundraising event that takes place during the July NASCAR racing weekend held at the New Hampshire Motor Speedway in Loudon. This year, the walk followed an afternoon XFINITY Series race. Approximately 250 participants walked the one-mile circuit, raising more than $15,800. Through its relationship with Team Penske, PPG was able to invite NASCAR Sprint Cup Series driver Joey Logano to join the walkers.

The Red Bucket Brigade is made up of SCC volunteers who pass red buckets through the stands and collect contributions from racing fans at both the July and September Sunday NASCAR events at the speedway. According to LaPrade, more than $81,000 has been raised through these events since PPG got involved.

“This is quite an honor,” said Patenaude. “The work SCC does is so important to the kids it reaches and to our communities. We view our ongoing commitment to SCC as something that contributes significantly to the well-being of children, that what we do can make a difference. We are touched that the SCC has recognized us this way. We appreciated being named Sponsor of the Year, but it is second to the important work that SCC does.”