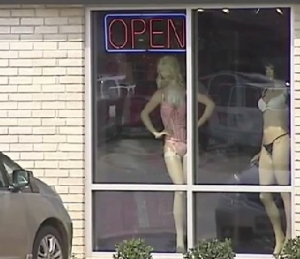 An Oklahoma City storefront is allegedly contributing to a slew of recent car crashes, a local news station reports.

According to local police, there have been eight crashes in the area surrounding Hustler Hollywood since its opening on June 12. The store displays a few scantily-clad mannequins in its window, which some locals find distracting.

"I just had a minor fender bender looking at the mannequins in the window of the new Hustler Hollywood store," a resident said in an email to KOCO 5 News. "We both (drivers) agreed that it was going to cause a lot of accidents."

However, many drivers disagree.

"You see worse things walking in the mall and in the movies," said Diane Ray Sanders, a local resident. "Tell distracted drivers to look at what’s going on in traffic and stop worrying about everything else."

Hustler Hollywood says it has no plans to remove the mannequins from the storefront.