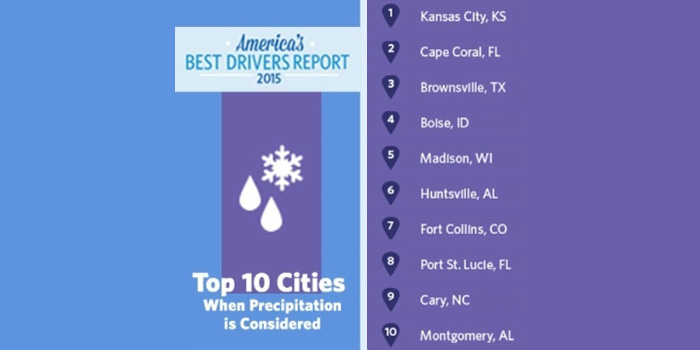 As Americans get ready to embark on holiday road trips to visit friends and family, scientists are warning that one of the strongest El Niños on record could bring unusually wet conditions to roads in much of the country. While this added precipitation might result in mayhem in some places, the 2015 Allstate America’s Best Drivers Report reveals certain cities are safer than others when factoring rainy or snowy conditions into collision frequency.

“Whether it’s packing up the family to drive to a friend’s house in another state, or traveling a few miles to open gifts at the in-laws, it’s important to stay extra vigilant on the roads this holiday season,” said Jim Ledder, vice president of auto claims, Allstate. “Auto collisions are already on the rise across the country, and combining that with an especially powerful El Niño makes Allstate’s ongoing efforts to keep drivers, their families and communities safe more important than ever.”

Recently, the National Safety Council (NSC) estimated the U.S. is on track for its deadliest driving year since 2007. In the first six months of 2015, NSC reported traffic deaths were up 14 percent from a year ago, and serious injuries were 30 percent higher over the same period. While there are many factors that impact highway safety, an improving economy and lower gas prices have led to an increase in the number of miles being driven. The Federal Highway Administration’s latest Traffic Volume Trend Report says cumulative travel for 2015 is up by 3.5 percent. The September report is based on hourly traffic count data reported by the states, using data collected at approximately 4,000 continuous traffic-counting locations nationwide.

The top 10 safest cities, when factoring in collision frequency and precipitation, are: 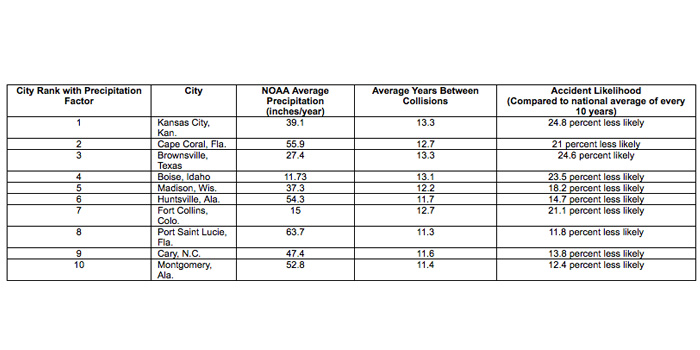 Allstate America’s Best Drivers Report is based on Allstate claims data and ranks America’s 200 largest cities in terms of car collision frequency to identify which have the safest drivers. The data uncovers how these cities rank when precipitation is a factor. These rankings are based on the expected driver performance given each city’s average annual precipitation as measured by NOAA.

Allstate releases the updated rankings annually – factoring in weather such as rain and snow – in an effort to raise awareness about the need to take extra caution when the roads are wet.