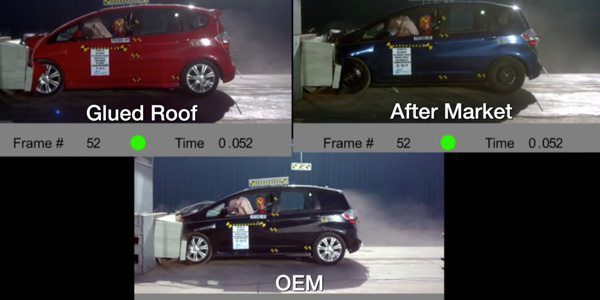 Tracy, whose law firm represented the Seebachans in their multimillion-dollar lawsuit against John Eagle Collision Center in Dallas, recently commissioned three crash tests at KARCO Engineering’s crash-testing facility in Adelanto, Calif. The objective was to replicate the Seebachans’ 2013 accident using three Honda Fits: A 2009 with its original OEM parts; a 2010 with a glued-on roof and an aftermarket windshield; and a 2013 fitted with an aftermarket hood, radiator support, windshield, bumper reinforcement bar, left and right fenders and left and right hood hinges.

The control vehicle – a 2009 Honda Fit with its original parts – performed in much the same way as it did in previous IIHS tests, according to Tracy. The vehicle established a baseline of “eight inches of pass-through over the D-ring of the passenger-side belt” during the crash test, according to Tracy.

The other vehicles didn’t do so well.

Those pass-through numbers are significant, Tracy explains in a new video, because of their effect on “occupant kinematics,” or “the way the occupant moves going forward and going rearward on rebound.”

While the crash tests involving the all-OEM Honda Fit replicated previous IIHS tests showing that the occupants of that vehicle should be able to walk away from an accident, data from the crash-test dummies in the other two vehicles “show that both the driver and passenger would suffer broken legs, ankles and feet,” according to the Tracy Firm.

“When vehicle manufacturers design, develop, test and assemble vehicles, one of the primary responsibilities they have is to tune the safety systems to the design of the vehicle,” Tracy says in the video. “What we saw in our three crash tests is that ever-so-slight changes to material or to the assembly as it relates to repairing a vehicle can have devastating consequences to the way the safety systems are tuned.”