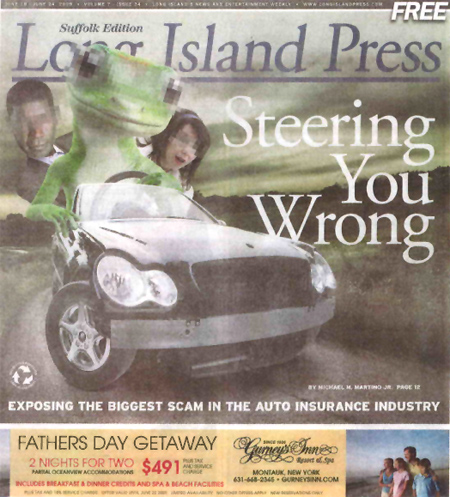 A lengthy article on steering published recently in the Long Island Press uncovered insurance company steering tactics it called “sneaky,” analyzing recorded phone conversations with call center representatives with the writer listening in while shop owners made the calls themselves.

The article also mentions what’s termed in the insurance industry as “non-AP’s,” (non-Agreed Price) or when a representative successfully gets an insured to choose a DRP shop over a non-DRP shop because the insurer will not pay the non-DRP shop’s higher estimate. In fact, the article claimed that “non-AP’s” are celebrated internally in the insurance industry, citing a document it obtained that was sent to a rep with these words written on the top: “Congratulations, you got a non-AP!!”

The Press listened to phone call recordings of GEICO reps and called the reps “cordial, rehearsed and seemingly sneaky.” The newspaper also said one of the first things the rep said was “how much easier life would be if the insured would take the car to an Auto Express facility.” Also, one rep was recorded as saying, “It could take up to five business days to get out to look at your vehicle.” Another said, “It could be a lengthy process.”

The article also features an interview with Greg Coccaro of North State Custom in Bedford Hills, New York, whose lawsuit against Progressive has been widely publicized (click HERE to read the latest on Coccaro’s case).