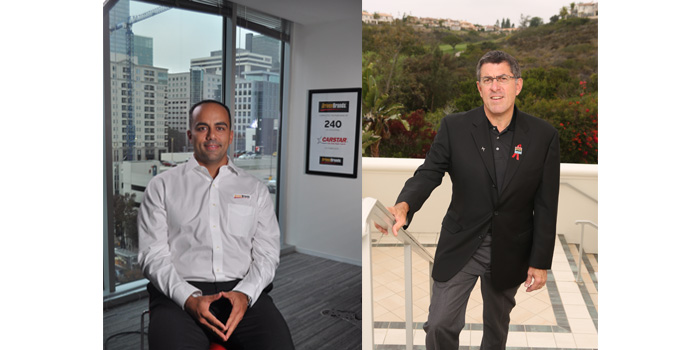 Jose Costa, group president of Driven Brands, which recently acquired CARSTAR, outlined an aggressive growth strategy in a teleconference held Nov. 30th for the media, saying that they will be making a lot more acquisitions under the “Paint & Collision” vertical as well as their three other verticals: Repair & Maintenance, Distribution and Quick Lube.

“You’ll probably see one to two to three acquisitions a month going forward,” Costa said. “We want to quadruple our system sales in the next 36 months; we are north of $1.5 to $1.6 billion now. We’re going to grow a lot through acquisitions, and we want to own the aftermarket automotive space in those four verticals.”

Asked if Driven Brands’ goal was to sell CARSTAR in the future once growth metrics were achieved, Costa said no.

“We buy things to keep them and grow them. We don’t buy them to sell them again,” he said. “If you look at the Roark [Capital Group] portfolio, they still own their first investment, Carvel. They have Focus Brands, which includes Cinnabon, Carvel, McAlister’s and a lot of other restaurant brands. And they want to do the same thing with Driven Brands. So everything we buy we plan, hope and attempt to hold for a long time.

“Roark Capital tends to be a more conservative, long-term investor. So they’ll invest and wait five, 10, 15 years. They won’t do a buy-and-flip. This is very different than what you’ve seen with the other MSOs.”

Dan Young, who was previously senior vice president of insurance for CARSTAR but was recently promoted to brand president, said CARSTAR would continue to focus on insurance work to grow the business.

“CARSTAR has historically always been insurance friendly. There’s no question DRPs are where it’s at,” said Young. “Ninety percent of all our work is insurance-related in some way, shape or form, and we only see that increasing. I think that there is an appetite for more work through fewer partners, but holding those partners accountable. You have to be ready for those challenges, and our operations team, with Dean [Fisher] and Melissa [Miller] at the helm, are driving that operational improvement across our entire network every day. There’s a lot of competition out there, let’s face it; the other four guys are out there and asking for the same work. So we’re trying to put ourselves in first-mover advantage wherever we can do that.”

Added Costa, “We only have 240 stores in 30 states. There’s no reason why we couldn’t double that number in the next two to three years.”

Young was asked if he felt there was enough opportunity for growth in the collision industry to achieve their goals, and he said he felt confident there was.

“We have stores that aren’t at capacity,” he said. “The industry is certainly declining in the number of shops, but we still have way too much capacity out there for all the shops versus what you need to have a healthy shop. We certainly plan to grow the work we have, grow the number of partners and grow the network.”

Asked if Roark would ever consider buying one of the mega consolidators, Costa said anything is possible.

“Everything is on the table. It’s not something we’re looking at very detailed right now because we’re a franchising platform, so we know we’re very good at franchising. We do have a very small sample of company-owned locations, mainly in the quick lube space. But with Roark Capital behind us, everything is possible. We do look at options to buy one of the large MSOs, but it’s not a priority for us right now.”

With the rapid consolidation going on in the collision industry, making it seem like a race between the top five mega consolidators as to who can gobble up shops the fastest, Young was asked whether speed will come into play in CARSTAR’s growth strategy or will they continue to pace themselves.

“Having been here for 12 years, at least on my end, I began to get very selfish about who we were inviting in. We’ve got to have the right fit, because there’s a lot expected today and for good reason. I think that Driven Brands brings us the wherewithal to strategically look at acquisitions that maybe before we didn’t have the ability to go and target, so with their horsepower, we might be in the arena to look at MSO acquisitions.

“But I think that when you look at 34,000 shops out there and look at the size we’re at, there are plenty of people out there who need the expertise around the operations. They need help with marketing, search engine optimization, IT and management systems, and the buying power that we’re going to create with the size that we’re at. I think it’s a confluence of events that are forcing people to make decisions, and I really feel like we’re in a position now of strength and have multiple ways to grow. We can grow the traditional way of isolating a shop that would be a candidate, MSO acquisitions, targets where there’s three and four and five and six and seven chains that might be for sale, but then I think the important strategy too that we’ve talked about is internally. How do you build an internal process that says, ‘Hey, this shop has really done well, and they deserve a shot at shop two or shop three or shop four?’ And I know that a big focus of Jose’s is identifying candidates that are ready inside your own organization for the second or third or fourth shop because they already understand the systems and the processes of CARSTAR and can benefit from that. And it’s easier for me, quite frankly, and the insurance team to sell that additional store to all of the other insurance partners we’ve gotten them hooked up with in the past. It’s kind of three-pronged: it’s the traditional way, it’s internal and it’s maybe some help from the merger and acquisition team.”

With the recent shakeup of leadership in CARSTAR, there was a question as to whether roles and positions could be shuffled again down the road. Costa said he didn’t think so.

“Corporately, there won’t be any more changes,” he said. “We did one restructuring move, and usually we do it once and don’t do it again. As far as resources, you’ll see we want to add a lot more resources under the insurance team and the operations on the corporate side. On the franchisee side, hopefully we’ll see franchise profitability increase by a couple points. We went from purchasing around $50 million of goods to purchasing close to $100 million overnight, so that gives us a lot more leverage to sit down with our associated partners and paint partners and ask for more support and more benefits from a pricing standpoint for our franchise owners.”