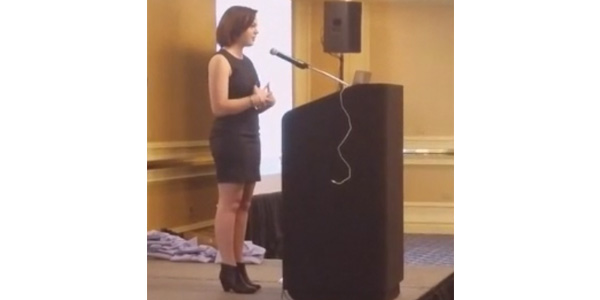 Collision Repair Student of the Year Anna Michalski sees the award as a validation of her decision to enter the auto body profession.

Anna Michalski talks about choosing the right career path during her acceptance speech at the 2016 SEMA Show.

Two years ago, Anna Michalski of Peters Township, Pa., toured her local vocational school and thought about entering the culinary or cosmetology programs. Then she walked into a collision repair classroom.

“And I thought it was just so cool,” Michalski told the Observer Reporter newspaper of Washington, Pa. “And I said, ‘This is what I want to do.’”

There must have been something behind the revelation, because Michalski has excelled in the collision repair program at Western Area Career & Technology Center – completing the I-CAR Introduction to Collision Repair series – and she now works at a local Chevy dealership. In October, the Collision Repair Education Foundation named her one of two 2016 Collision Students of the Year.

The foundation honored Michalski, along with Alan Zimmerman of Tiffin, Ohio, during a reception at the 2016 SEMA Show in Las Vegas.

“After my acceptance speech, a lot of people came up to talk to me,” Michalski told the Observer Reporter. “I had a stack of business cards to go through. Especially the women in the industry were very enthusiastic. They were like, ‘Do what you want to do, but stay with us.’ The part that I’m nervous about is finding a spot for me in the industry. It’s a huge industry, and now is the time to jump in, but I have to wait four years because I’m going to college.”

Michalski loves cars, and said painting cars is an outlet for her artistic side. Although she clearly is a natural, she admitted that some people are surprised to see a female in a body shop.

“When people walk into our shop in Sun Chevrolet and they look at you, there’s definitely pause,” she told the newspaper. “There’s a brief moment of, she’s supposed to be here? Yes I am, and I’m working hard.”

Before deciding to enter the collision repair program, Michalski had been feeling “really lost” as she contemplated her career path, she said during her acceptance speech. Although she loves collision repair, she admitted that she has moments when she questions herself “because other people don’t feel I should be here.”

“Other people don’t feel I should be in this industry because I’m a woman, or because I’m too young,” she said, adding that she works two jobs and goes to school. “It’s great to finally be recognized as yeah, you’re supposed to be here, yeah this is you, and here’s an award for it.”