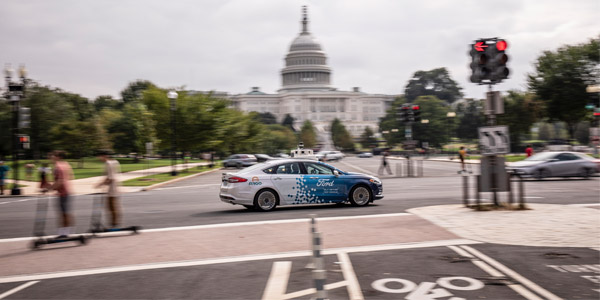 Ford Motor Co. recently announced that it will be giving lawmakers a firsthand look at self-driving cars by testing those cars in Washington, D.C. – the first company to do so.

“Both Ford and district officials are committed to exploring how self-driving vehicles can be deployed in an equitable way across the various neighborhoods that make up Washington, D.C., and in a way that promotes job creation,” said Sherif Marakby, CEO, Ford Autonomous Vehicles LLC.

Ford will be working with local officials in Washington, D.C., to ensure that they test their self-driving vehicles in all eight of the district’s wards — and eventually operate business pilot programs in all eight wards as well — as they work toward deployment of a commercial service in 2021.

“We believe that ensuring widespread access to mobility services enabled by self-driving vehicles is vital, a sentiment that was underscored in a report by Securing America’s Future Energy, which found that autonomous technology could improve people’s access to jobs as well as retail markets,” said Marakby.

Ford’s partners at Argo AI, who are leading development of the self-driving system, already have vehicles on district streets, mapping roads in the first step toward testing in autonomous mode. Over the next year, the fleet will grow as they expand testing areas, including within the city’s downtown core.

“Expanding our operations into Washington, D.C., is an enormous opportunity to understand how a comprehensive self-driving business could be utilized,” said Marakby. “The city is one of the largest markets in the United States, with its population growing significantly during working hours as people commute from the suburbs or take the subway. Outside of commuters, there are millions of visitors every year, major conferences, a popular food scene, and high demand for ride-hailing and delivery services.”