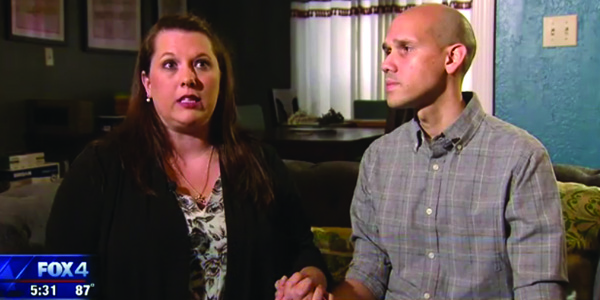 Collision Industry Conference (CIC) Chairman Jeff Peevy has announced that Matthew and Marcia Seebachan, who won a $42 million negligence lawsuit against John Eagle Collision Center in 2017, will be making an appearance at the CIC meeting in Las Vegas Nov. 5.

Collision Industry Conference (CIC) Chairman Jeff Peevy has announced that Matthew and Marcia Seebachan, who won a $42 million negligence lawsuit against John Eagle Collision Center in 2017, will be making an appearance at the CIC meeting in Las Vegas Nov. 5.

The Seebachans, who despite devastating injuries are now able to travel again, will be filling the “empty chair” that Peevy started placing at the front of the room of CIC meetings in January to represent consumers who generally have no voice in the collision repair industry but who rely on safe and proper repairs to protect themselves and their families.

“The empty chair represents the consumer we provide products and services to who are sometimes victims of our poor work who never have a word in our decision-making process,” said Peevy.

Things got personal for Peevy when he realized how many similarities there were between the Seebachans and his daughter and son-in-law. Both couples live in Texas. All are around the same age. And his daughter and son-in-law bought a used Honda Fit from a dealer at around the same time the Seebachans bought the used Honda Fit they were driving when the horrific accident occurred.

“Here is a young couple who had their whole life ahead of them when this happened to them,” Peevy said. “To me, it makes it even more tragic. It could have been my daughter and son-in-law.”

Peevy and his wife, Marie, will interview the Seebachans on the CIC stage after lunch between 1 p.m. and 1:30 p.m. The interview will not focus on companies or individuals involved in the case but on the impact the incident had on the Seebachans’ lives and how everyone in the collision repair industry has some level of responsibility in ensuring the safest repair possible.

“The Seebachans really want the industry to know some things,” said Peevy. “There are things they didn’t know. Marcia looked at the CARFAX report because they didn’t want a car that had been wrecked, and technically it hadn’t because it did not show up on the CARFAX. There was no indication that any work had been done on it. There were so many things they learned that consumers have no idea about.”

Peevy, whose term as CIC chairman ends in November in 2020, wanted to make a big statement before his duty is up.

“If I were to accomplish anything as CIC chair, I wanted to bring the consumer into our decision-making process,” Peevy said. “We get caught up in our own little industry disputes and industry family arguments that we forget about the consumer.

“My hope before I retire is for just one more technician or shop owner or manager to make sure there is not one more Seebachan – not because of the fear of being sued but for moral reasons. That would make me happy.”