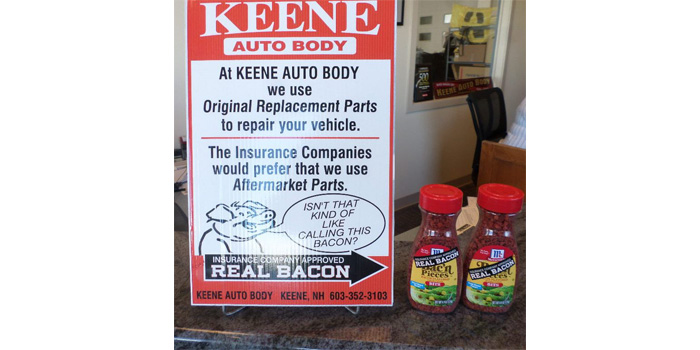 A New Hampshire body shop owner who has long battled his state insurance department over aftermarket parts recently came up with a new way to educate his customers on part choices.

Steve Piispanen, owner of Keene Auto Body in Keene, N.H., was planning to sponsor a local “Bacon Fest” featuring bacon, blues, and brews and needed an idea to tie bacon to collision repair. So he came up with the idea to compare bacon “bits” to aftermarket parts.

He was trying to come up with a display for his shop illustrating the bacon bits and aftermarket parts comparison when a local sign guy stopped by his office and suggested an idea and said he would take care of the rest. The next day, the sign guy came in with what Piispanen considered a nice, professional display he could put on the counter in his customer reception area.

“The display got a few laughs and generated talk, which is exactly what we wanted,” said Piispanen.

Piispanen has previously contended to the New Hampshire Insurance Department (NHID) that “OE surplus” parts State Farm wrote for his customer’s vehicle violated a state law due to the parts not being “like, kind and quality” to original parts.

When the NHID responded to Piispanen that it did not find any violation of New Hampshire state insurance laws or regulations, Piispanen said it was because the NHID believes the OE surplus parts are approved by Ford and rebranded for the aftermarket industry when, according to Piispanen, they’re actually “rejects from the assembly line, otherwise they would have been sold through a Ford-approved vendor or at the very least would have been in Ford packaging instead of plain bags and boxes.”

Advertisement
In this article:Keene Auto Body