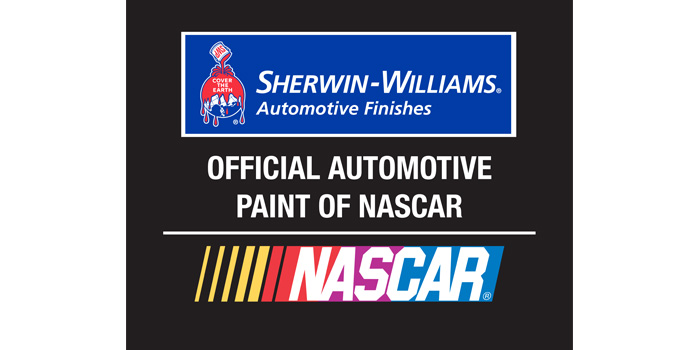 Newly signed extension will designate Sherwin-Williams as the “Official Paint of NASCAR” through 2017.

“Our continued partnership with Sherwin-Williams is another example of FORTUNE 500 brands successfully using NASCAR as an integral part of their marketing mix,” said Norris Scott, vice president of partnership marketing. “Sherwin-Williams’ integrated approach using our intellectual property, both at track and at retail, has proven highly effective. We look forward to expanding the Sherwin-Williams relationship across its multiple business divisions.”

By continuing as an Official NASCAR Partner, Sherwin-Williams will also retain its designation in the “Official Automotive Paint of NASCAR” and the “Official Transportation Finishes of NASCAR” categories. Sherwin-Williams Automotive Finishes division will further expand its visibility as one of the leading product innovators and servicers to the collision repair and original equipment industries. Sherwin-Williams is the only direct distribution automotive refinish manufacturer and provides service to its collision repair and OEM customers through 200 company stores in the U.S. and Canada.

“We’re extremely excited and honored to continue and expand our role as the ‘Official Automotive Paint of NASCAR,’” said Adam Chafe, vice president of marketing for Sherwin-Williams Automotive Finishes. “Since 2000, some of the biggest names in motorsports have trusted their vehicles’ finish to Sherwin-Williams. We aim to help teams cross the finish line and ensure that their cars and sponsors always look their best on the track; that also holds true with every repair and repaint our collision repair center customers provide for their end customers.”

Through its renewal, Sherwin-Williams maintains its role as a Contingency Sponsor in the NASCAR Sprint Cup Series and NASCAR Touring & Weekly Series. The NASCAR Contingency Program fosters relationships between competitors and the high-quality, performance-driven brands that are leaders in their respective categories, and awards money to teams for each race and at the end of each racing season. As part of the Contingency Program, Sherwin-Williams will be title sponsor of the Fastest Lap Award in the NASCAR Sprint Cup Series.

In addition, Sherwin-Williams continues as a Proud Partner of the International Motor Sports Association (IMSA), extending a partnership that began in 2013.

For more information about Sherwin-Williams Automotive Finishes, or the brand’s motorsports program, visit www.sherwin-automotive.com or call (800) 798-5872.

Advertisement
In this article:nascar, sherwin-williams