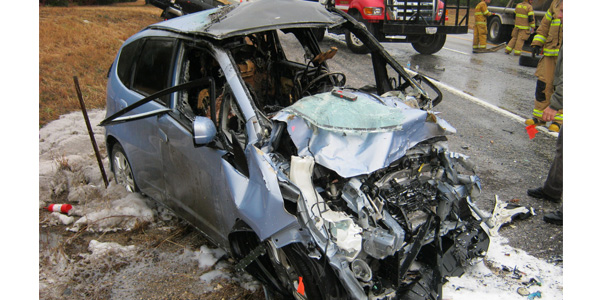 In a deposition, the body shop director said the shop performed repairs “according to the insurance company,” not based on the OEM procedures.

A Dallas couple suffered devastating injuries in a 2013 car accident because an auto body shop used glue to repair their vehicle’s roof, a lawsuit contends.

“The roof was defectively attached to the vehicle structure by John Eagle Collision Center,” the lawsuit alleges. “It is effectively disconnected from the structure and did not provide the necessary contribution to the overall vehicle structure. There are no welds at the flange between the roof and the cant rail.”

Negligent repairs led to other structural failures in the collision, the lawsuit contends.

In a deposition, the body shop director said the shop performed repairs “according to the insurance company,” not based on the OEM procedures.

After a December 2013 collision, 33-year-old Matthew Seebachan and his 29-year-old wife Marcia were trapped inside their used 2010 Honda Fit when the glued roof caused the car’s structure to catastrophically collapse and catch fire, according to the lawsuit.

In pretrial testimony, Boyce Willis, the body shop director at John Eagle Collision Center in Dallas, admitted that the company ignored Honda’s repair specifications. John Eagle Collision Center glued on a new metal roof to repair hail damage when Honda specified that the metal roof should be welded together, according to evidence filed in the lawsuit.

When the Seebachans purchased the Honda Fit in August 2013, the CARFAX report did not indicate any previous repair work or damage, even though Willis admitted that the vehicle previously had been in the shop for hail damage to the roof and other exterior panels.

“John Eagle Collision Center, by covering up its arrogant repair of using glue rather than following the manufacturer’s body repair specifications and using welds just like Honda had done when they designed, developed and tested the vehicle, created a time bomb that was waiting to explode,” asserted vehicle-safety lawyer Todd Tracy of the Tracy Law Firm in Dallas, who represents the victims.

In December 2013, the Seebachans were on their way to spend Christmas with Marcia’s grandmother in the Texas Hill Country. The driver of a Toyota Tundra pickup truck hydroplaned into the path of their car.

Because the Honda Fit’s metal roof had been glued on by John Eagle Collision Center and not welded as specified by Honda, the collision set off a domino effect of structural failures, according to the lawsuit. The defective roof repair caused the car’s safety cage to collapse and the fuel tank located below the driver’s seat to rupture, the lawsuit alleges.

Trapped behind the steering wheel, Matthew Seebachan remained conscious as flames fried his feet and lower legs, before he was pulled from the wreckage by a motorist. Another motorist rescued his wife through the passenger window of the mangled car, according to the lawsuit.

Automotive and biomechanical engineers in the case analyzed the Seebachans’ wrecked Honda Fit at the Tracy Law Firm’s Dallas Crash Lab. They concluded that had the roof been properly welded by John Eagle Collision Center as specified by Honda’s body repair manual, the Seebachans likely would have had only minor injuries, according to the law firm.

The Seebachans bought the used 2010 Honda Fit from Huffines Kia in Denton four months before the crash. The CARFAX report presented to the Seebachans at the time of their purchase did not disclose the roof repair.

“There was no way the Seebachans or anyone from Huffines Kia could see that the roof was glued rather than being welded because paint and shiny trim covered up a time bomb,” Tracy said. “The testimony and facts in this defective-repair lawsuit clearly show that John Eagle Collision Center used glue instead of the more expensive welding because it cares more about getting paid by the insurance company than they care about putting a vehicle out there on the road that’s safe and reliable.”

None of the three occupants riding in the Toyota Tundra pickup – including an infant – were injured.

The lawsuit seeks more than $1 million in damages from the collision repair facility.

“Defendant John Eagle made a conscious and deliberate decision to place unsuspecting people in a vehicle that it knew or should have known could cause serious injury or harm if involved in an accident such as occurred in this case,” the lawsuit alleges. “Indeed, John Eagle knew that people could be killed or seriously injured, and deliberately chose to place the Seebachans in danger.”